Author’s note: This is part two of a two-part series on being an effective pro-life advocate at family holiday gatherings. Part one is here: 6 Things Every Pro-Life Advocate Needs to Know Before the Holidays.

In my first article on this subject, I explained that political discussions with extended family are some of the most complicated dialogue situations to navigate due largely to the power dynamics. I also discussed several reasons why the holiday dinner table is not an ideal time or place for persuading people to change their mind about abortion.

But what if your pro-choice aunt does bring up abortion or another political topic at the dinner table and tries to pull you into a debate with her? Here are seven tips for making the best of that situation:

Author’s note: This is part one of a two-part series on being an effective pro-life advocate over the holidays.

I’ve been speaking about relational apologetics more often lately, a phrase that I define as “cultivating relationships with people who have different beliefs, for the sake of genuine friendship and for discovering truth together.” One of the most frequent questions I get asked after discussing this topic is how to handle potentially volatile political discussions with family members, such as in the context of a big family dinner at Thanksgiving or Christmas. Even Saturday Night Live has made light of how politically charged Thanksgiving dinners can become:

As my colleague Rachel Crawford noted during a discussion of relational apologetics that we recorded for the Equipped for Life Course Podcast:

I think that a large part of long-term apologetics is going to be coming from what sort of relationship you have with the other person. . . . Having relational apologetics with a family member, especially if they are your mother or your grandmother and they are not a peer, that is going to be especially difficult. . . . that poses an extra challenge.

Family members present several challenges that may make engaging in discourse with them particularly  difficult if you want to be persuasive. I’d like to explain why that is and offer several practical tips for optimizing your chances of changing people’s minds in this context.

Here are six things to keep in mind before you arrive at a big family gathering this holiday season:

I spoke at Stonebridge Church in Charlotte again last November after they finished going through the Equipped for Life Course, to answer their questions.

I noticed John Paul, one of our volunteers, looked nervous in his conversation with a student in front of our poll table. I walked up and started listening so he could get help if he needed it. John Paul quickly asked me for my take, and I started asking questions to try to figure out what the other student’s view was. “Brent” had signed “Yes” to the question “Should 20-Week Abortions Remain Legal?” I asked:

Tim: Why do you think 20-week abortions should be legal?

Brent: It’s a woman’s right to live her life the way she wants to.

Tim: Do you think there should be any restrictions on abortion at all? What do you think of, say, a 35-week abortion?

Tim: You are? Aren’t you restricting women’s rights to live their lives the way they want to? 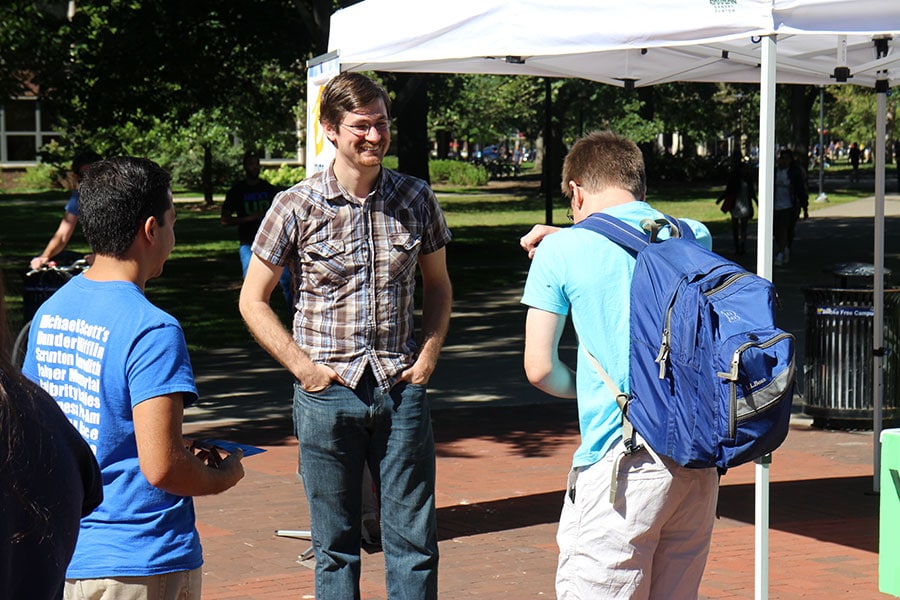 A great deal of pro-choice rhetoric uses the kind of language that does not very naturally allow room for any restrictions on abortion. For example, any bodily rights rhetoric is going to suffer from this problem. For instance, you can’t say “my body, my choice” to only justify early abortions, because late-term fetuses are still located in her body. In order to justify early abortion without justifying late abortion, you need to argue that the late-term fetus is more valuable than the early-term fetus.

When I notice these kinds of rhetorical mistakes, I will frequently “turn the tables” on them in a gracious way. This is often an extremely weird experience for the pro-choice person because they’re used to the rhetorical power of “my body, my choice” working in their favor, and all of a sudden they find themselves having to argue against it. This tactic would work very well in debates, but that isn’t how I use it. Rather than merely trying to score rhetorical points, I’m hoping to accomplish two things:

Brent: No, because before 20 weeks, the fetus isn’t viable.

Tim: You’re right about that. I’m trying to understand your view so help me out here. Why do you think viability is important?

I received an email from a follower I’ll call “Mike” who wanted some advice on how to initiate a dialogue about abortion with his pen pal. I thought some of my tips might help you if you’re trying to figure out how to use relational apologetics.

I’ve removed some of the details from Mike’s email to help protect his identity.

Since you spend a lot of time writing about how pro-lifers ought to communicate their views when conversing with others, I thought I’d email you with a question I had. I’ve been emailing a pen pal of mine for a few months now, and we mostly talk about our own lives and mutual interests. We’ve never discussed the abortion issue before, and it’s not something I really want to bring up, but I also want to be able to discuss other topics without worrying about whether or not it will eventually lead to a full-blown abortion debate.

Funnily enough, we’re both interested in bioethics, and she’s asked me what bioethical issues interest me the most. I’m not really sure if I should use this as an opportunity to mention my views as a pro-lifer and consistent life ethicist.

Thank you for your help. I really appreciate it.

I’d use the bioethics common ground to tread a little into abortion waters. Say that the bioethical issue you’re most interested in is the ethics of abortion, and that you’ve actually been a little worried that mentioning that might make things awkward. Say that you’d be really interested in her take on that if she’d be willing to share it. Say that you’re not one of those obnoxious pro-lifers that shouts opinions at people. You’re interested in both sides learning from each other and having respectful dialogue. You would especially like to do that with a friend since it gives more opportunity for learning from each other, since you can both research each other’s statements and then go back again for clarification.

And then let her take that where she wants to. If she doesn’t want to get into it, respect that. She may love debating that stuff though, and now you have a great launchpad into that topic.

Question: Do you have any advice for Mike? Post it below in the comments!