Sometimes when I have an opportunity to share my faith in Jesus, I don’t take it.

Sadly, many people have had negative experiences with Christians, which makes them disinclined to engage with one again. If I jump at the first chance I have to witness to them, they are more likely to close up and be unwilling to talk at all.  Instead, I try to very intentionally create an environment where the person feels safe to discuss religion. [Tweet that!] It’s like the difference between welcoming someone to come inside and opening the door, and grabbing him by the hair and dragging him through it. Notice that I am not justifying Christians perpetually avoiding conversations about religion. We must be intentional about sharing our faith, but while also being prudent, making the most of the opportunity (Colossians 4:5-6). Sometimes the person never opens up, but other times, this approach really pays off. 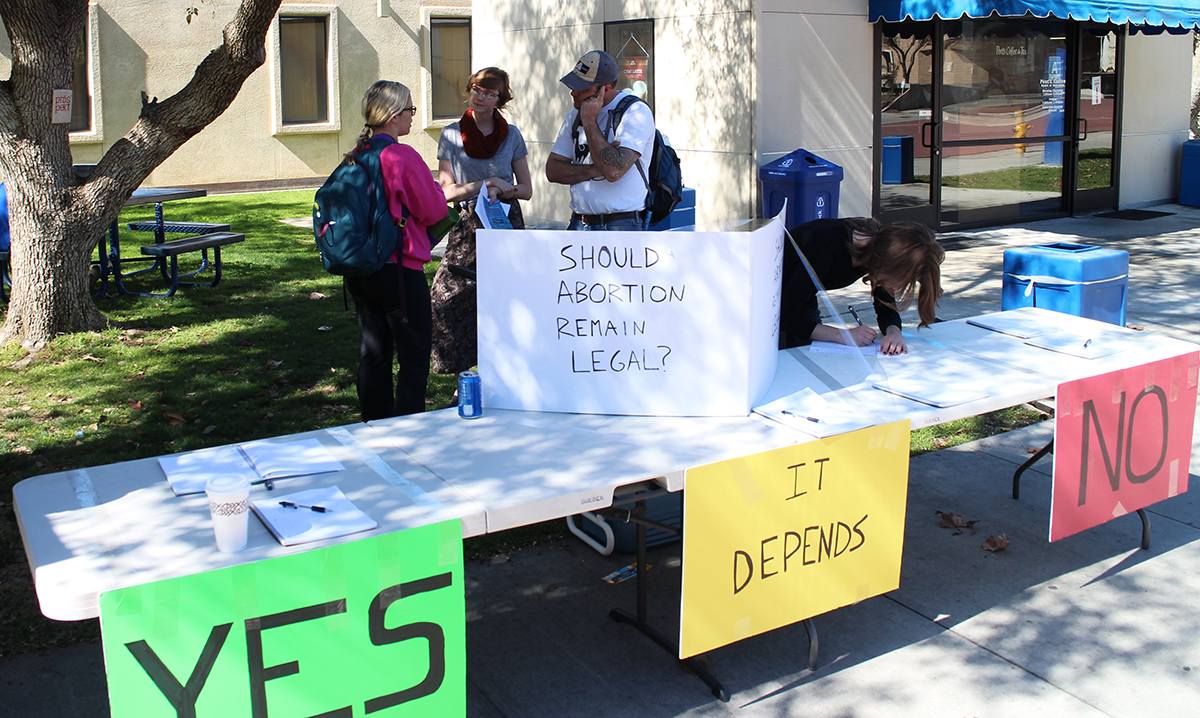 On February 21st, 2015, Equal Rights Institute trained a group of students and community members in Bakersfield, CA. Then on the 23rd and 24th we brought them to CSU Bakersfield so they could put what they learned about dialogue into practice. We set up two simple poll tables to get conversations started.

I was standing beside our “Should Abortion Remain Legal?” poll table (see photo above) when I saw Susan walking by. She did not seem interested in engaging me, but nonetheless I asked her, “Which one would you sign?” pointing to the poll table. Susan thought for a moment and said:

Jacob: Okay. Do you think abortion should remain legal through all nine months of pregnancy?

Susan: No, definitely not.

Jacob: I agree. How about for sex-selection?

Susan: Not that, either!

Jacob: I agree with you about that too.  Do you think it should be legal to use abortion as birth control?

Jacob: Well, there are three things we agree on!

Susan: I know where you are going, but I just disagree when people try to bring religion into this. I don’t want to talk about religion. I’m not religious.

Jacob: That’s okay. Then how about we discuss science and philosophy?

We had a respectful, thoughtful dialogue for about twenty minutes. Susan brought up many different pro-choice arguments, but abandoned each of them after some questioning. After twenty minutes, we had a great rapport with each other. She knew I was willing to really listen to her. She also knew I was making reasonable arguments, not using rhetorical tricks or debate tactics.  Finally, she asked:

Susan: You know, I’ve never really thought about this before. Why are you pro-life?

Jacob: Well, I can only give you a partial answer at this point. I have reasons that I think even an atheist would think are valid reasons for being pro-life, but my foundational reasons for being pro-life have to do with my faith. I want to respect the fact that you said you don’t want to talk about religion, though.  Would you like to hear about my foundational reasons?

Susan: No, no. I am okay with talking about religion with you. Religion just bothers me because a lot of people try to push it on me, but I want to hear your answers.

Jacob: Susan, I’m sorry for how your past experiences with religious people have frustrated or hurt you. I can understand your frustration with having someone aggressively push their beliefs on you. When it has happened to me, it made me feel disrespected and unvalued. If it’s okay, I’d like to clarify the likely motivation of these Christians when they preach their beliefs to you. [Susan nodded.]

I believe Christians who get pushy when they share their faith have sincere hearts behind their aggressive style. We Christians believe that people who die without knowing and putting their faith in Jesus will be separated from Him forever in Hell, whereas those who put their faith in Jesus will have their guilt forgiven by God and will get to be with Him forever in Heaven. I believe it is out of a sincere love for you that Christians have been pushy with you. They don’t want you to go to Hell. Maybe you should consider that a compliment. [Susan cracked a smile.]

Susan: I believe Jesus was a real man, but he was just a good man.

Jacob: I don’t think it’s possible for him to just be a good man. I don’t think anyone can be good if they claim to be God without it being true. Jesus claimed He was God, and millions upon millions of people have devoted their whole lives to Him. Many have even died for their faith in Jesus! So if he was lying about being God, I don’t think He can be called a good man, no matter how nice he seemed to be. Do you?

At this point, there was a long, but not awkward, silence. It was the kind of silence that falls when someone is wrestling with a difficult thought, and I could tell this was a thought Susan had not encountered before. I couldn’t help but be surprised, since Susan had been so insistent that she did not want to talk about religion. I made a judgment call that talking about Jesus was more important than returning to the subject of abortion, so we didn’t go back. Instead, we had a long discussion about Jesus, who He claimed to be, and whether or not all religions are the same.

Despite her initial hesitancy, she actually seemed comfortable with the way I challenged her worldview, and was open and receptive to what I said. After a while, she really needed to go to class.

Before she left, I said:

Susan: I’m not ready to pray now, but I will pray tonight to ask God to show me whether or not He is real. 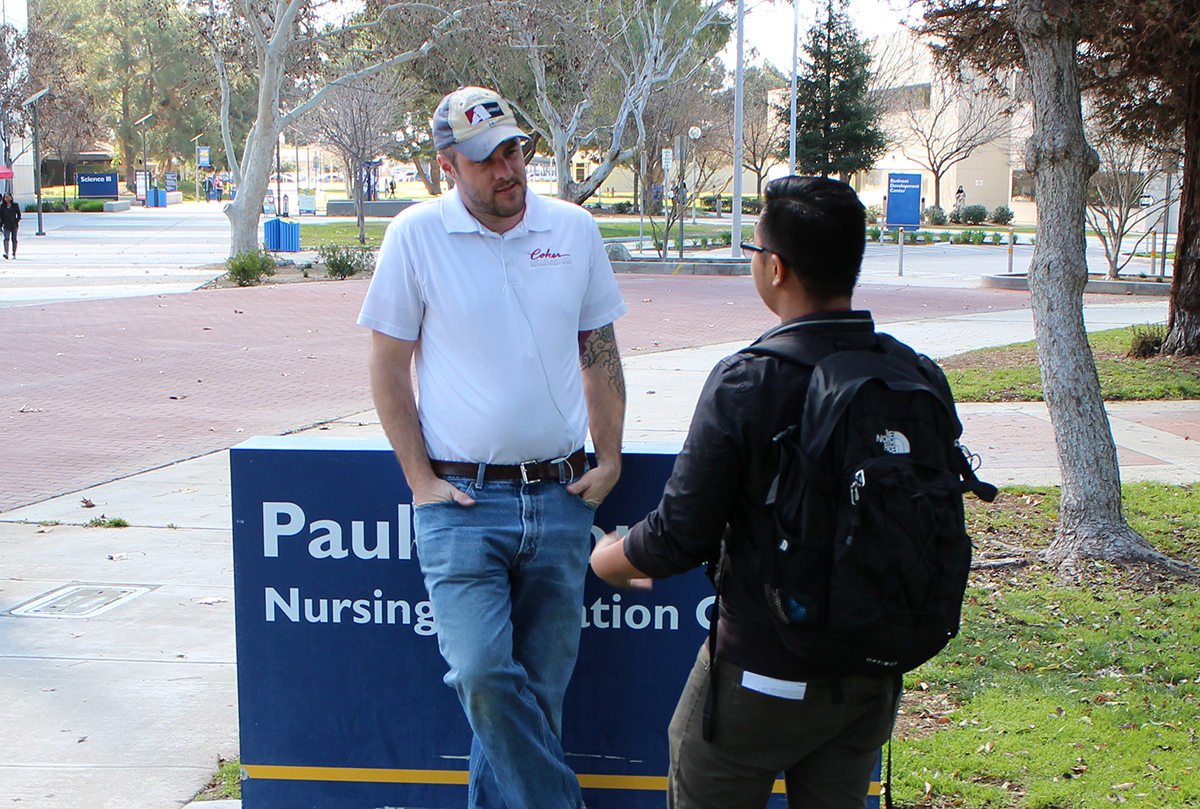 Jacob Nels talks to a student at CSUB.

It is far too easy to just write someone off as a lost cause. People are hurting, stubborn, angry, combative, ashamed, and bitter, but never a lost cause. [Tweet that!] If God can change the life of a persecutor like the Apostle Paul and a sinner like me, surely the hurting college student that doesn’t want to talk about religion is reachable too. We need to create opportunities where we can lead people closer to Jesus, and sometimes that just takes a little patience.

Thank you for helping us to make abortion unthinkable, and Jesus thinkable.

The post “From ‘I Don’t Want to Talk About Religion’ to ‘I Will Pray Tonight’” originally appeared at the Equal Rights Institute blog. Subscribe to our email list with the form below and get a FREE gift. Click here to learn more about our pro-life apologetics course, “Equipped for Life: A Fresh Approach to Conversations About Abortion.”

The preceding post is the property of Jacob Nels (apart from quotations, which are the property of their respective owners, and works of art as credited; images are often freely available to the public,) and should not be reproduced in part or in whole without the expressed consent of the author. All content on this site is the property of Josh Brahm unless the post was written by a co-blogger or guest, and the content is made available for individual and personal usage. If you cite from these documents, whether for personal or professional purposes, please give appropriate citation with both the name of the author (Jacob Nels) and a link to the original URL. If you’d like to repost a post, you may do so, provided you show only the first paragraph on your own site and link to the original post for the rest. You must also appropriately cite the post as noted above. This blog is protected by Creative Commons licensing. By viewing any part of this site, you are agreeing to this usage policy.