This is what I posted to my Facebook page earlier today:

I’m going to go spend four hours with one of the smartest philosophers I know, after three hours with him yesterday. I may never change his mind. But we both like each other and we’re both challenging each other. His friendship is a worthy enough end, even if he never meets my savior.

Am I saying this to brag or to get a pat on the back? Nope. I’m saying this because I want you to be convinced to have relationships with people, whether or not you believe they will think more like you because of it.

I’m not going to get into the details of what happened today. My friend and I had a private debate and I’m sure both of us allowed ourselves to speculate on ideas that we haven’t fully worked out yet, and it wouldn’t be appropriate for public comment. 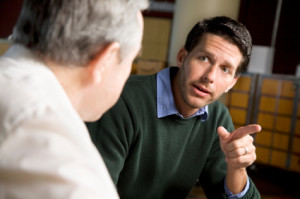 It looked kind of like this.
But for four hours.

What I can say is that as terrifying as it was to even privately debate a friend who is as smart as he is, who is probably in the top philosophy course in the country right now, it was so worth it. We definitely challenged each other more than I expected, in both directions. But what a joy to just spend four hours doing non-stop debate with somebody who thinks carefully and doesn’t bring in purely emotional arguments. We just vigorously attacked each other’s arguments using thought experiment after thought experiment, but in the way he says professional philosophers do that: charitably, in an informal dialogue, seriously looking for the flaws in each others views and our own views. I’m genuinely looking forward to my next opportunity with him.

In a sense, he’s my philosophical nemesis.

And he is my friend.