A few weeks ago I posted the link to an interview that Soulation recorded with me about how pro-lifers can love pro-choice people better while discussing an emotional issue like abortion. We had decided during that interview to record a bonus mock debate, with Jonalyn playing the pro-choice position, but it was lost due to technical difficulties. We decided to record again after several Soulation readers requested to see the debate.

I’m glad we did. It was a good chance to show in real-time what my conversations on college campuses usually look like. They’re usually a little different than this, as Jonalyn played both a very inquisitive pro-choice person, (so I spent more time talking than I usual do on campus,) and Jonalyn also played a very philosophically savvy pro-choice person. I think most pro-choice people are very smart, but I don’t talk to a lot of people on campus that have spent a ton of time thinking and reading about this issue. Jonalyn managed to combine a bunch of the best arguments that I think exist, including a pro-choice biblical view that I’d never heard of. So you can watch me do my best to respond thoughtfully to every challenge Jonalyn came up with, while keeping the way the arguments interact with each other clear in my mind. 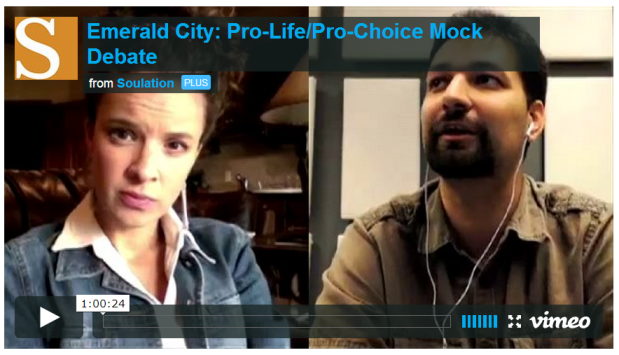 As I said before, I highly recommend you follow Dale and Jonalyn’s work. It’s both important and unique.