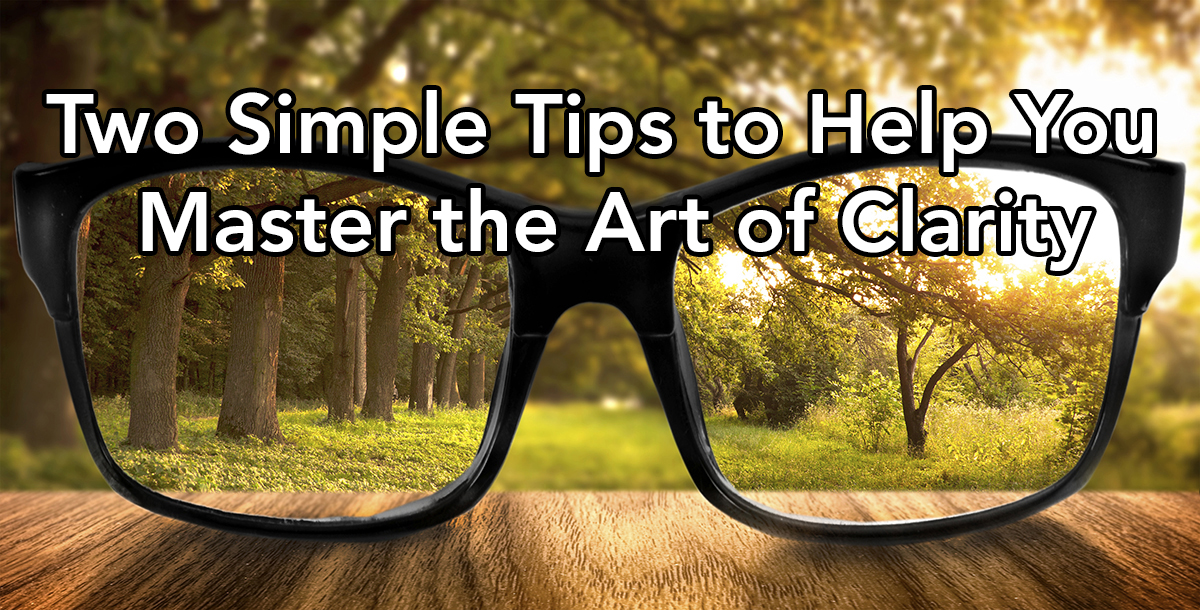 Have you ever had a really ugly fight with someone close to you, only to realize after the fact that it was all based on a simple misunderstanding? It’s very frustrating, especially because all of the pain of that fight could have been avoided if just one of the two parties had been better at clarity.

It doesn’t matter if it’s a personal issue with a loved one, a writing assignment for a class, or a dialogue about something controversial like abortion, the ability to communicate clearly is paramount to success. While no one can become good at clarity overnight, I have two very simple, very effective tactics to offer. These are not ground-breaking, in fact I regularly notice good communicators that follow these guidelines. I just haven’t noticed anyone point these practices out as generally helpful.

[bctt tweet=”RT @EqualRightsInst: My attitude in any conversation is that clarity is completely my responsibility. #prolife” via=”no”]

While it would be nice if both parties worked equally hard at being clear and with equal skill, no one should expect that. So my attitude in any conversation is that clarity is completely my responsibility. That doesn’t mean it’s actually my fault any time there is a misunderstanding. But I should work hard to make sure I understand the ideas she is trying to express, just like I’m going to work hard to help her understand my ideas.

#1: Make sure you understand her by repeating what she said back to her in different words.

The more conversations I have about abortion, the more aware I am of the vast cultural gap between pro-life and pro-choice people. You would think two people that speak English fluently would be speaking the same language, but that really isn’t the case sometimes. Words and phrases have different connotations to different people depending on the family they grew up in, the culture they identify with, the experiences they have had in the past with those words and phrases, and who knows how many other factors. So any time I think there’s a good chance she could mean different things by something she said, I’ll say something like:

“I want to make sure I’m understanding you. Let me repeat back to you what I heard you say, so then you can correct me if I’ve gotten it wrong. It sounded to me like you said…”

Obviously it would be cumbersome and annoying to say that literally every time she said something. Usually at the start of a conversation I spend a few minutes asking clarification questions to try to understand what she believes about abortion. Then, before launching into my counter-argument, I’ll summarize her view for her and ask her to correct me if I’m wrong. Sometimes it takes a few tries before she approves of my summary, but that’s okay. People have complicated views about abortion and it’s well worth a few minutes of my time to understand her view instead of just responding to a carbon copy picture in my head of what pro-choice people think. [Tweet that!]

During the rest of the conversation I keep an eye out for points that are likely to create misunderstanding. This skill takes time to develop. If you haven’t had many conversations about abortion, err on the side of too much clarity. It’s far better than not enough clarity.

Repeating back to people what I heard them say has saved many of my conversations from becoming lost and frustrating, but there’s another benefit: it shows the other person that I’m actually trying to understand them.

People tend to expect an “Us vs. Them” mentality in a conversation about abortion. Going to so much extra trouble to make sure you aren’t misunderstanding her can really surprise some people, and it does wonders for creating a productive atmosphere for dialogue. It’s one of the most respectful things you can do for someone in a dialogue about abortion.

Many people will emulate the person they are dialoguing with. If one person starts off by being aggressive, the other will often follow suit. Alternatively, if one person is really respectful, the other person will often change their demeanor.

Sometimes it’s obvious that the person I’m talking with is upset with me for being pro-life and would be glad to have a yelling match. But they control themselves because they’d feel and look like a jerk for yelling at someone so respectful, even though they deeply despise my views.

By modeling a high standard of courtesy in dialogue, you can raise the bar for everyone else, and going to great lengths to understand what she means is an incredibly courteous gesture. [Tweet that!]

#2: To make sure she doesn’t misunderstand you, say what you don’t mean.

You may have expected a tip symmetrical to the first one, something like, “Ask her to repeat back to you what you said,” but I generally don’t find that to be a helpful way to make sure I am understood. It’s asking a lot of people. Sometimes she isn’t articulate enough to rephrase something in multiple ways. It can also come across as suspicious and actually raise the tension. It’s respectful to go to great lengths to understand her, but it can come across as disrespectful to ask her to do the same thing to make sure she understands you. She might wonder if you think she’s an idiot for not being able to follow you.

On rare occasions where I’m talking to someone who is both stubborn and hostile, I might suggest we switch sides for a minute and try to argue each other’s view, just for the sake of helping her to see that she doesn’t understand what my view really is. (Thanks to my colleague Jacob Nels for this clever idea.)

A better way to make sure she understands you is to learn to be aware of easy ways to misunderstand what you’re saying, and say that you are not saying that. For instance:

Lately I have found myself clarifying what I am not saying when I use thought-experiments, because people often struggle to track analogies. Learning what kinds of things to clarify in this way can take time. If you realize that someone misunderstood something you said, take note of it. If more than one person has misunderstood you about the same concept, that means it’s a really good candidate for a “Here’s what I don’t mean” clarification in the future.

Question: What things do you do to add clarity to a difficult conversation? Share your tips in the comments below!

The post “Two Simple Tips to Help You Master the Art of Clarity” originally appeared at the Equal Rights Institute blog. Subscribe to our email list with the form below and get a FREE gift. Click here to learn more about our pro-life apologetics course, “Equipped for Life: A Fresh Approach to Conversations About Abortion.”