Are you frustrated with political polarization? Have you noticed that conversations between the opposite ends of the political spectrum are getting harder and harder? Do you wonder why it has gotten so ugly, and do you wish you could do something about it?

The human mind is naturally ordered toward making sense of things. It wants to come up with explanations. When we observe something we don’t understand, we go through a mental process of thinking about possible explanations for it. This is something you can dwell on consciously, but even if you don’t, you come to basic conclusions without even thinking about it.

For any weird phenomenon, there are many possible explanations. How do we narrow down the list to settle on something to believe? There’s no perfect formula for this, but there are some healthy tendencies that we should all have. For instance, Occam’s Razor (Among competing hypotheses, the one with the fewest assumptions should be selected) is a good place to start. Also, we should seek explanations that explain all of the data, not just some of it. There are certainly other principles of rationality for evaluating the plausibility of various explanations, but there is one in particular that is severely underrated. I think anyone who adopts it will have more accurate beliefs and much better dialogue and understanding of people with whom they disagree.

There are no Snidely Whiplashes 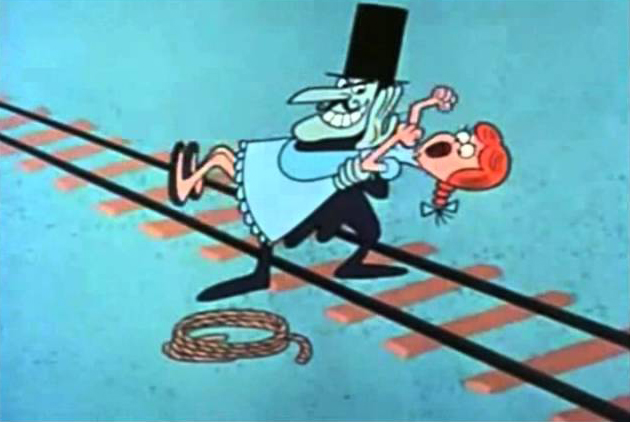 Any explanation that assumes the existence of a Snidely Whiplash is a bad, intellectually lazy explanation.

For those of you who don’t know, Snidely Whiplash is the arch-nemesis of Dudley Do-Right in various animated segments on the old Rocky and Bullwinkle Show. Snidely Whiplash is as stereotypically evil as they come, with green skin, a long curly moustache, a cackling laugh, and character motivations rarely more complex than the desire to do evil because it’s fun. For example, he is frequently seen tying women to railroad tracks. The hero he opposes is stereotypically opposite to Snidely Whiplash, even having “Do Right” in his name.

Don’t misunderstand me, I’m not saying that there are no evil people. I’m saying no one thinks of themselves as evil. Not Democrats. Not Republicans. Not Hillary Clinton. Not Donald Trump. Not Planned Parenthood. Not even ISIS. Any explanation of a person’s behavior that assumes they’re doing what they’re doing “because they’re just evil and want to do evil” is an inherently bad explanation.

This should be obvious, but I see people making the mistake of assuming their opposition is Snidely Whiplash all the time. Republicans talked about Hillary Clinton as though she’s Snidely Whiplash and her supporters must be mini-Snidely Whiplashes because only an evil person could support someone so purely evil. Democrats talk the same way about Donald Trump. I think the evidence is quite strong that they’re both people that have done and said many, many immoral things. But they’re both more complicated than being purely evil.

It’s easy to just denounce the other side as evil. It’s hard to listen to them. It’s hard to try to understand them. It’s risky to treat the other person like a decent human being because then you might have to take them seriously. It’s always more comfortable to dehumanize someone you disagree with, and make no mistake, thinking of someone as though they are Snidely Whiplash dehumanizes them. If you don’t like it when pro-choice people dehumanize the unborn, then you have no business dehumanizing pro-choice people. [Tweet that!]

Pro-choice people don’t hate babies. Their views on abortion are incredibly destructive for babies, but that isn’t their motivation. Really. They think their view is the more compassionate one. They might have selfishness going on subconsciously, but at the conscious level, they think they’re being loving. I’m sorry if that frustrates you, but if you don’t understand their motivations, then you will never dialogue well with them, and you are very unlikely to ever change their minds.

If you’re conservative, and liberal people confound you, I’ll give you a nudge in the right direction: liberals are motivated by compassion. You may disagree with their policies, you may think they aren’t good at helping people, but liberals don’t do what they do because they are just stupid or evil.

If you’re liberal, and conservative people confound you, let me help you. It isn’t that conservatives don’t care about poor people, refugees, women, or black people. Conservatives tend to be pretty practical and they think your policies don’t work. Disagreeing with your policies does not mean one doesn’t care.

If you believe or act or speak like the other side is Snidely Whiplash, then you have no business bemoaning how polarized people are. You are part of the problem.

You might think it’s okay to be a jerk once in awhile, but your jerkiness enables everyone else to be jerks too, and on and on we snowball into a world without listening or understanding. We live in a nasty, polarized place now. This isn’t the only cause, but it is one of them, and it’s a problem you can actually help to fix. Do your part.

The post “Snidely Whiplash Is Not on Facebook” originally appeared at the Equal Rights Institute blog. Subscribe to our email list with the form below and get a FREE gift. Click here to learn more about our pro-life apologetics course, “Equipped for Life: A Fresh Approach to Conversations About Abortion.”