Since I started working as a pro-life advocate in 2011, I have deeply struggled with how to have productive conversations with moral relativists.  I could “win a debate” with them, but I have a loftier goal of actually changing their minds, and I was nowhere near meeting that goal.

Next I tried pointing out the logical inconsistency of them on one hand claiming there is no objective morality, and on the other hand implying I had moral failings for disagreeing with them about something like abortion.  That also did not seem to help, either because they could not understand the logic or because they chose to ignore it.  One time I even pretended to steal a guy’s bicycle, but he found that to be more cute than persuasive.

Last fall I tried something different when I met an alternative version of me. 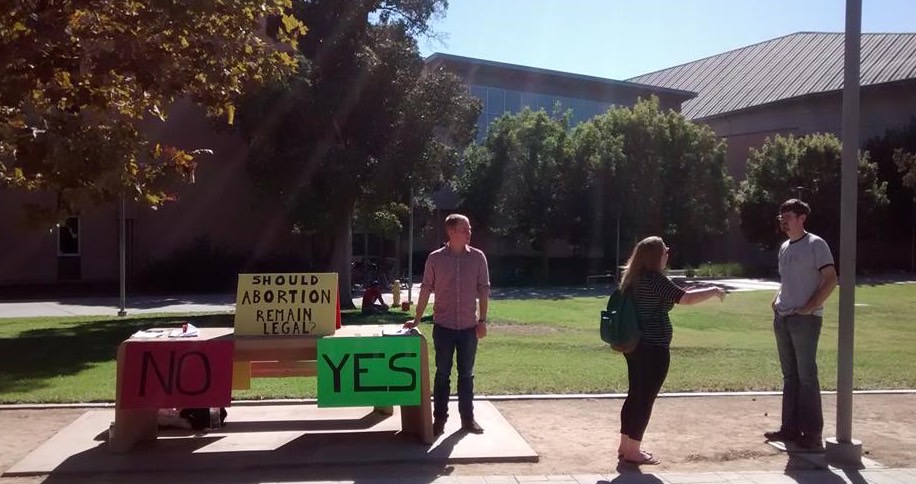 On September 26th, 2014, Equal Rights Institute trained a group of Biola University students. Then on September 30th we brought them to CSU Fullerton so they could put what they learned about dialogues about abortion into practice. We set up a simple poll table as a way to get conversations started.

Troy came up to our “Should Abortion Remain Legal?” poll table at CSU Fullerton and started talking to one of our volunteers.  The discussion shifted quickly from being about abortion to Troy’s relativistic views, and I was invited to join the conversation.

After wrestling with Troy’s worldview for a while, I felt frustrated.  I started to have those unfortunately all-too-familiar prideful feelings I get sometimes when I talk to someone who believes something I do not respect.  But I really wanted to understand why he believed something so puzzling, so I tried a different tact.  I asked:

Tim: Troy, how did you first come to be a relativist?  I don’t mean, “What is your current argument for it?” I’m asking an autobiographical question, more like, “What’s the story for how you landed there?”

Troy: I was raised by Christian parents.  I was never convinced that God really existed, and when I was about twelve I stopped believing altogether because they couldn’t answer my arguments.  They were Christians because they wanted to believe, it felt comforting to them, but I’m more rational than that.  I figured out that religion was just invented to control people and it didn’t make sense to be anything but a relativist.

Tim: Did your relationships with your parents become strained when you stopped believing in God?

Troy: Ha, yeah, you could say that.

Troy: I stopped believing in God, and without God it didn’t make sense to believe in objective morality, so the latter.

Tim: I was wondering if that was the case!  This is going to sound really strange coming from a Christian, but I completely agree with your logic.

Tim: I actually think it makes sense to be a relativist if God doesn’t exist.  It seems to me like you need an objective moral lawgiver in order for objective moral laws to exist.  That’s even an argument Christians use for theism.  We’ll reason:

You’re using the same first premise, you’re just arguing for a different conclusion with it. For you, it goes:

So it seems like the real disagreement between us isn’t about objective morality.  The fundamental thing that makes us come to such different conclusions is that I believe in God and you don’t.  In some other possible world, if I’d become convinced that there was no God, I’d probably be very similar to you.  Let me ask you this: if you were convinced that God does exist, would that instantly make you a non-relativist?

Troy: Well yeah, if God exists then he can make the rules however he wants, so I’d have to stop believing in relativism.

Unfortunately, while Troy agreed with me and was interested in that discussion, by then he had spent over an hour with us and he needed to go to his next class. 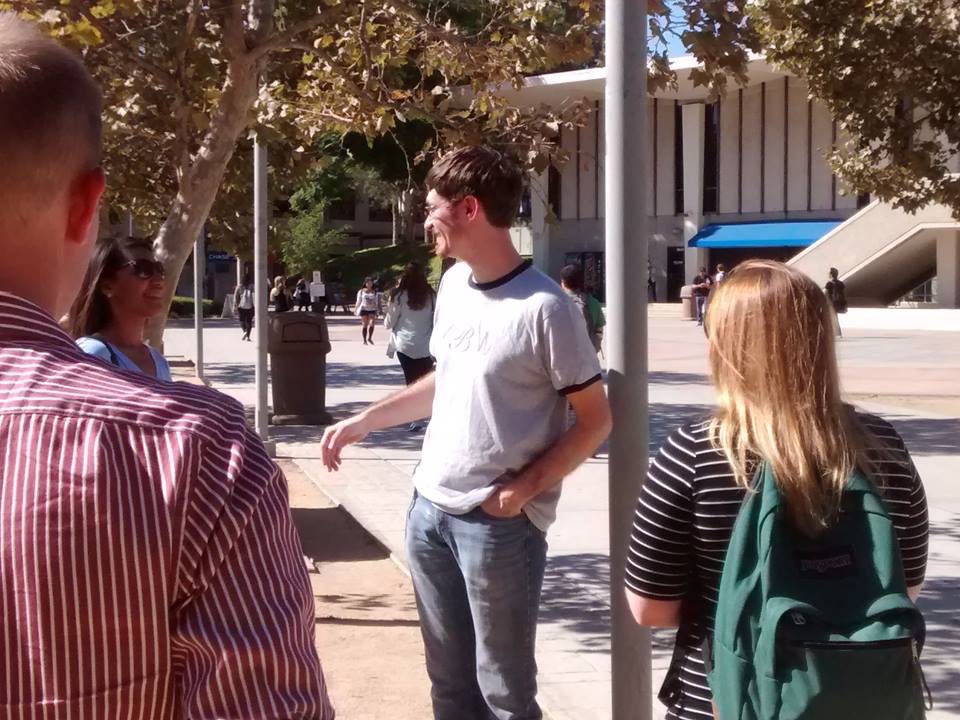 Timothy Brahm engages with pro-choice students at CSU Fullerton while training pro-life students from Biola who went through our seminar.

I have taken this approach a few times now with people who ascribe to moral relativism, and those conversations have been far better than the ones I used to have.  I think there are two reasons for this improvement.

First, Troy and I clarified our foundational disagreement.  While Troy and I had other topics we could argue about, the question of whether or not God exists turned out to be the root cause of many of our other disagreements, so getting to that root cause helped us to have a more meaningful discussion.

Second, I showed respect to him.  I am not saying that it is always wrong or unhelpful to challenge a moral relativist with the uncomfortable implications of his view. However I worry such challenges can have the unintended consequence of suggesting to the relativist that I think he is stupid.

[bctt tweet=”RT @EqualRightsInst: We should respond to people, not just statements. #prolife” via=”no”]

I feel good about how this conversation went because I connected well with Troy; it isn’t that I think I  discovered the key to responding to any relativist.  Two factors that helped me have a successful conversation with Troy were that I showed him respect by going to great lengths to understand what his view actually was, and he knew I was trying hard to understand his view.

In a future article, I will share with you what I do when a conversation about abortion turns into a disagreement about whether God exists (and what I would have said to Troy).

The post Relating to Relativists originally appeared at the Equal Rights Institute blog. Subscribe to our email list with the form below and get a FREE gift. Click here to learn more about our pro-life apologetics course, “Equipped for Life: A Fresh Approach to Conversations About Abortion.”

Question: Have you had productive conversations with relativists? Share your dialogue tips below!