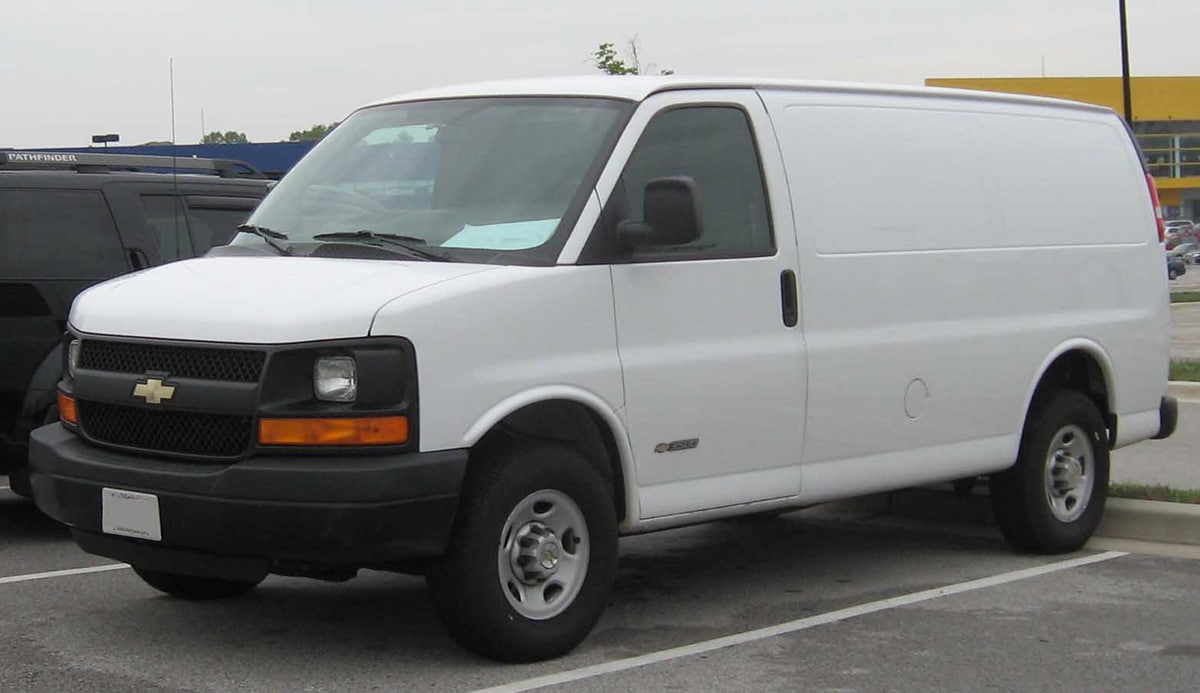 If your idea of pro-life activism involves tricking women into this van, you need to rethink your strategy.

Abolish Human Abortion (AHA) has been accused of encouraging pro-lifers to kidnap abortion-vulnerable women. I’m going to explain why this is a false accusation against AHA and argue that it would be morally wrong to kidnap people, even if it resulted in saving lives.

If you are familiar with the tone of the work that Abolish Human Abortion does, then it won’t surprise you that I’m not one of their biggest fans. I agree with them that human abortion should be abolished and I think their graphic design is stellar. That’s just about the limit of our common ground though. I don’t think we should picket churches with graphic abortion signs. I don’t think we should use fake Facebook accounts. I don’t think we should have a hostile or juvenile tone when debating people online. I had a discussion with one of AHA’s leaders once, and after it went about as well as you would expect, I decided that future discussions with them would probably not be worth my time.

If you haven’t read it yet, my friend Clinton Wilcox, who I’ve mentored for several years, wrote a very damning piece about AHA, showing that by their own definition William Wilberforce was not an abolitionist! He’s written a few other pieces about them as well that I think are worth reading.

Having said that, I’m going to defend AHA today because a lot of people are accusing them of encouraging pro-lifers to kidnap abortion-vulnerable women, when a simple understanding of how Facebook works will plainly show that this is a false accusation. 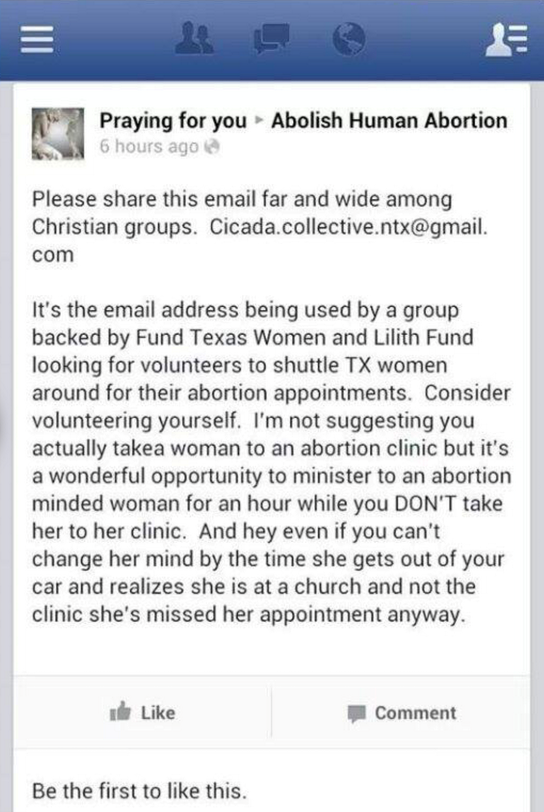 If you can’t see the picture, the text says:

Praying for you -> Abolish Human Abortion

It’s the email address being used by a group backed by Fund Texas Women and Lilith Fund looking for volunteers to shuttle TX women around for their abortion appointments. Consider volunteering yourself. I’m not suggesting you actually takea [sic] woman to an abortion clinic but it’s a wonderful opportunity to minister to an abortion minded woman for an hour while you DON’T take her to her clinic. And hey even if you can’t change her mind by the time she gets out of your car and realizes she is at a church and not the clinic she’s missed her appointment anyway.

The most important thing to notice about this post is at the top. That little arrow means that a group or page called “Praying for you” posted this on the wall of AHA’s Facebook page. (Similarly, my friend Joshua Stein posted the above screenshot to my Facebook page, in order to alert me to it.)

One of the administrators of AHA’s Facebook page deleted the offensive post as soon as he saw it, but not before others had taken screenshots of the post and started sharing it with pro-choice organizations and news stations, leading many to accuse AHA of either writing the post themselves or tacitly supporting it because it appeared on their wall for a short period of time.

Neither accusation is fair. AHA has publicly condemned the post several times now.

Also worth noting, the “Praying for you” page immediately deleted their account after posting their “activism idea” to AHA’s page, which tells me that they were probably trolling, purposefully trying to cause trouble. There are other plausible explanations too, like they didn’t want to deal with the backlash of a post like that. I doubt we’ll ever know for sure.

So that’s what happened. The far more interesting question is how to assess the moral justification for doing what “Praying for you” suggested.

This may seem obviously wrong to you, but I want you to stop and realize why this is actually a moral conundrum for some pro-life people who read “Praying For You’s” post:

Before I offer an argument against “pro-life kidnapping,” I need to briefly explain an important distinction between two moral worldviews that often plays a role in adjudicating moral conundrums like this.

The difference between moral objectivism and moral absolutism

Credit for the principled argument I will make below goes to my brother Timothy Brahm who explains the distinction between moral objectivism and absolutism this way:

The absolutist and the objectivist both believe that moral truths are objective, meaning not relative to either the culture or the individual.  They both believe, essentially, that morals are “absolute,” though they disagree about what that means.

“Truth-telling” is an objective moral value, but, an objectivist might argue, the value of preserving human life is greater than the value of truth-telling.  In this way, the absolutist must say you can’t lie to a Nazi to save a Jew, but the objectivist can say you can lie to the Nazi, while denying claims that there cannot be objective truth about lying.  The absolutist generally will deny that there are any real conflicts in moral principles.  If face-to-face with a Nazi, the absolutist would say you should either remain silent, say something misleading, or find some other alternative to answering directly.  Kant would be an obvious example of an absolutist.

This distinction is not original to me, I learned it from Scott Smith in his ethics class at Biola University on February 6th, 2008.  I’m aware that other people use the terms “objectivist” and “absolutist” in different ways, and I don’t intend to equivocate.  I’m not attached to the terms, only the distinction, and using these terms is the most clear way that I know to make the distinction.

There was some interesting debate two years ago between absolutists and objectivists on whether Live Action’s undercover investigative stings in Planned Parenthood clinics are inherently sinful or not since the operatives entered the clinic under false pretenses. Click here to read Professor Robert George’s piece against Live Action’s tactics, and click here to read Professor Peter Kreeft’s rebuttal.

I am a moral objectivist, thus I subscribe to Kreeft’s view on this particular debate. I think the good of exposing misinformation, manipulation and the systematic cover up of sexual abuse without violence outweighs the fact that they entered several Planned Parenthood clinics under false pretenses.

Having said that, as an objectivist, I still believe that pro-life kidnapping is wrong, and I’m going to offer a principled reason below. I’m not even going to discuss the pragmatic problems with the idea, (the fact that this plot wouldn’t work on about a dozen levels) because that’s much less important and less interesting. The question is, if it did work, would it be wrong? My answer is yes.

There are several morally relevant differences between modern-day America and Nazi Germany, where Dietrich Bonhoeffer plotted to kill Hitler. I’m going to name one critical difference below, and I believe it is a sufficient reason to demonstrate that it is not only morally wrong for American pro-lifers to kill abortionists, but it’s even wrong to kidnap people.

America is not a despotic nation.

Merriam-Webster dictionary defines a despot as “a ruler who has total power and who often uses that power in cruel and unfair ways.” Another definition is “a ruler with absolute power and authority.”

As long as America is not lead by a despot who changes our entire system of government, there are other ways to save lives and end abortion without using violence or other illegal or fear-inducing tactics like kidnapping. And that matters. If we can end abortion by non-violent means, then we are morally obligated to pursue those non-violent means.

Could the philosophers who read my blog create a thought-experiment that forces me to bite the bullet and say that maybe in a circumstance where X, Y and Z are true that it would be morally permissible to start a civil war over abortion? Perhaps, but that thought-experiment will by necessity look REALLY different than America in 2013 does.

“But we’re killing people, Josh! Don’t you get that?!”

Yes, I believe people are being legally killed in our country, yet I do not think that makes America comparable in ALL the morally relevant ways to Nazi Germany. Thus, even IF Bonhoeffer was justified in his plan to assassinate Hitler, that would mean literally NOTHING for pro-life activists in America until our political situation was much more comparable to Bonhoeffer’s.

This is one of the reasons that it is morally wrong to kill abortionists. Scott Roeder, the man who killed late-term abortionist George Tiller, may have intended to do good, but he was absolutely wrong when he became a vigilante and murdered George Tiller. Killing abortionists is certainly not justified until the political environment is a despotism and every other method of saving lives has been tried, and even then it wouldn’t be obvious that killing abortionists is justified. We have a long way to go before I believe a discussion can even begin comparing our situation with Dietrich Bonhoeffer’s.

The post “Why it would be wrong for pro-lifers to drive abortion clinic vans under false pretenses” originally appeared at JoshBrahm.com. Click here to subscribe via email and get exclusive access to a FREE MP3 of Josh Brahm’s speech, “Nine Faulty Pro-Life Arguments and Tactics.”