American abortion laws are among the most radical in the world. Unfortunately, though almost everyone knows that Roe v. Wade made abortion legal at the federal level, few people understand exactly how the case changed the country’s abortion laws. This gives me the opportunity to educate people when dialoguing about abortion at Arizona State University, and I’ve found that many pro-choice people change their attitude about Roe when they understand it better.

One Way to Dialogue about Roe

Many people label themselves as “pro-choice,” but this label doesn’t tell us much. People’s views on abortion restrictions can vary greatly, from wanting no restrictions whatsoever, to only having legal abortion available in the first trimester in the case of rape. However, the majority of people I’ve spoken to on college campuses will vaguely agree that they don’t support late-term abortion. After providing them with a few simple facts about late-term abortion, almost everyone will agree such procedures should be illegal. The example dialogue below illustrates how a pro-life advocate can help a pro-choice person realize that they disagree with the extremism of Roe because of their existing beliefs about late-term abortion:

Pro-life advocate: Hey, can I ask you what you think about abortion?

Pro-choice person: I don’t like abortion, but I think it should be the woman’s choice.

Pro-life advocate: Okay, help me to understand your view a little more. Do you think abortion should be legal in all nine months of pregnancy, or do you think that there should be some restrictions?

Pro-choice person: Well, I definitely don’t think all nine months; there should be some sort of cutoff.

Pro-choice person: Well, yeah, at that point it is definitely a baby, that’s not okay. 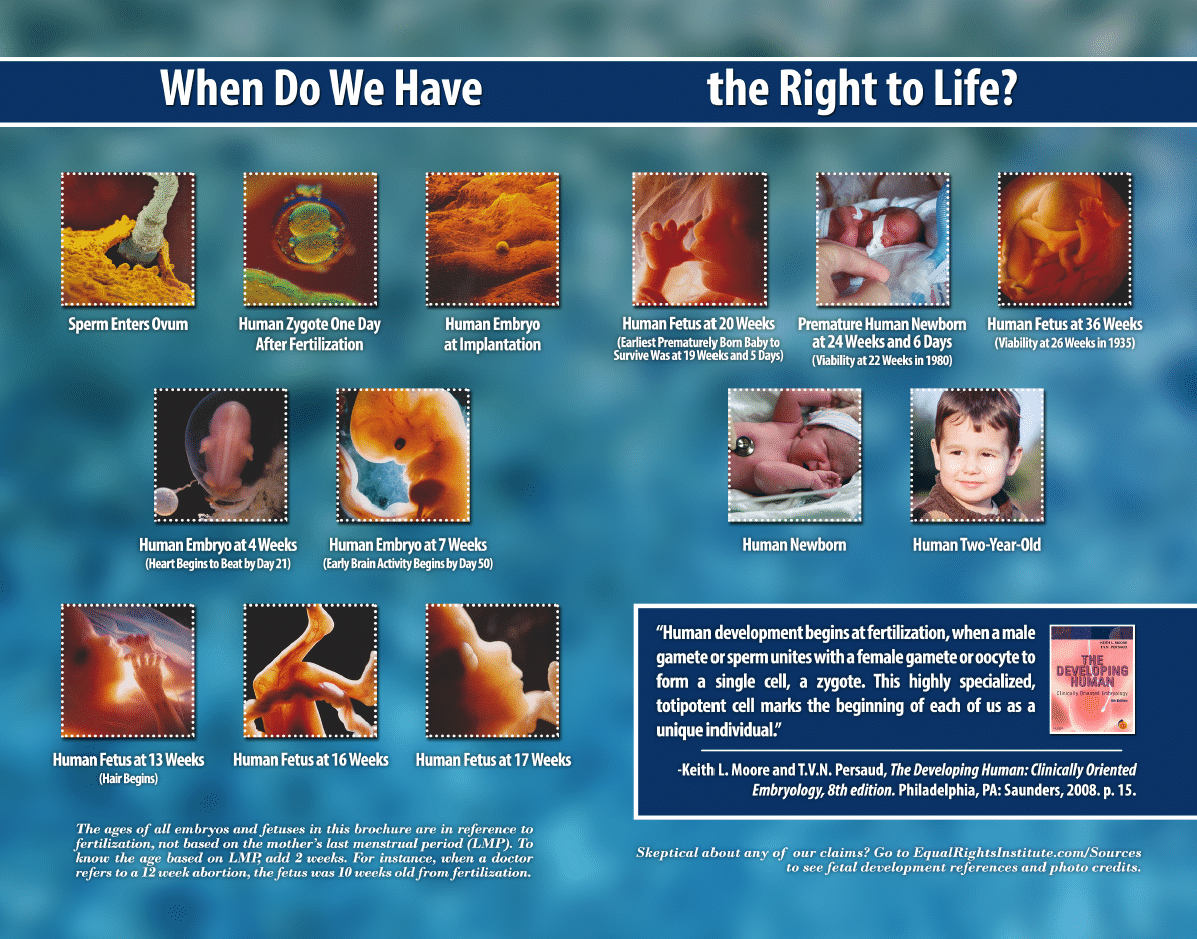 These are the first two pages on the inside of the ERI Outreach Brochure.

Pro-life advocate: Let’s look at this fetal development chart that has pictures of a developing human fetus. I use pictures because I am a visual learner. I don’t know about you, but it helps me. Can you show me where you think abortion should be restricted?

Pro-choice person: Maybe about here? [Pointing at a picture of a 13-week fetus]

Pro-life advocate: Yeah, okay, so that is actually pretty early in pregnancy, right around the beginning of the second trimester. Did you know that abortion is actually legal in our state of Arizona up until the 24th week of pregnancy? [Pointing at picture in fetal development chart.] And did you know that, at the federal level, there are no abortion restrictions and Roe v. Wade doesn’t allow states to restrict abortion before the point of viability?

This information usually comes as a shock to the pro-choice person, as most people believe supporting Roe comes part and parcel with being pro-choice. The pro-life advocate can help the pro-choice person understand that you don’t need to be pro-life to think Roe should be overturned. That’s how radical it is. [Tweet that!] Roe doesn’t just allow states to legalize late-term abortion, it makes late-term abortion the default law of the land and restricts states’ ability to change that.

For example, Arizona passed a 20-week abortion restriction several years ago, but the Ninth Circuit Court declared the law unconstitutional because of the precedent established by Roe. Consequently, abortions on pain-capable and viable babies are still legal in Arizona even though Arizonans want it to be illegal.

While no state has been able to ban abortion prior to 20 weeks because of Roe, the point at which abortion is restricted varies from 20 weeks to birth depending on the state. For example, the state of New York recently made headlines by decriminalizing abortion for all nine months of pregnancy. Because laws are different in each state, conversations based on those laws will be different, so it can be helpful to consult a reference like Americans United for Life’s annual report, which outlines the exact abortion restrictions in every state.

A Brief History of Roe and Doe

In Roe, the Supreme Court ruled that women had a constitutional right to abortion that the states could not impede, and every state was forced to allow legal abortion whether the people wanted it or not. The ruling determined that abortion could never be prohibited in the first trimester and that abortion could only be restricted in the second trimester for maternal health purposes. Abortion could only be restricted for the sake of protecting the unborn child after the point of viability (Planned Parenthood v. Casey modified Roe to remove the trimester framework, but still draws the line at viability). No state law restricting abortion outside of these narrow limits could be enforced.

Many people also aren’t aware of Roe v. Wade’s companion case, Doe v. Bolton, which was decided by the Supreme Court on the same day in 1973. Doe built on the abortion rights established in Roe by granting women the right to have an abortion even after viability if the mother’s health was at risk. This was particularly problematic because the court defined “health” very broadly, including “physical, emotional, psychological, familial [health], and the woman’s age.” Under these criteria, a woman could cite her “health” to justify abortion under practically any circumstance. The “health of the mother” language of Doe is what allows the New York “Reproductive Health Act” to open the door for legal abortions throughout pregnancy even while it claims to ban them after 24 weeks.

Roe and Doe jointly gave America some of the most extreme abortion laws in the world. While over 90% of European countries ban abortion at the point of pain capability (20 weeks) or earlier, America has no federal abortion restrictions at all, and states like Arizona that attempt to adopt similar restrictions on abortion have their laws struck down as unconstitutional because of Roe.

Though abortion dialogue often centers on scientific and philosophical topics, legal knowledge is very important, too. Shining a light on the radical nature of America’s abortion laws can be a persuasive tool in your conversations. Especially with Roe at risk, we’re likely to see more conversations about abortion legislation in our dialogues. By helping pro-choice people understand how extreme Roe really is, we can change their mind about American abortion law even without changing their mind about abortion.

The post “Pro-Choice Doesn’t Have to Mean Pro-Roe” originally appeared at the Equal Rights Institute blog. Subscribe to our email list with the form below and get a FREE gift. Click here to learn more about our pro-life apologetics course, “Equipped for Life: A Fresh Approach to Conversations About Abortion.”