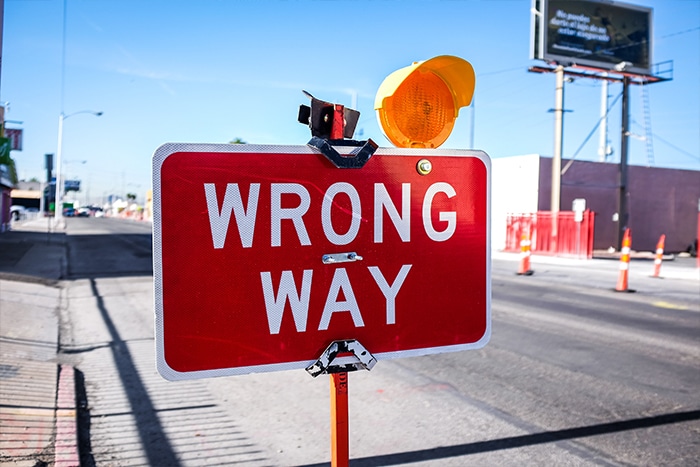 I suppose no one likes to be wrong, but I have a particular revulsion to it. (I’m sure there’s some deep-seated reason for that which my wife, the mental health counselor, could explain, but that’s beyond the scope of this post.) As much as it’s in my power, I try to avoid being incorrect about anything.

Of course, one could fairly wonder how my intolerance for being wrong squares with open-mindedness, which is held in very high esteem at ERI. The answer is this: I think most people conceive of open-mindedness in a way that doesn’t recognize the importance of holding strong convictions in the first place.

Open-mindedness gets a lot of press as the dubious virtue of not really believing anything. Thus the old canard: “be careful that your mind isn’t too open or your brain will fall out.” People are often hailed as open-minded when their beliefs are too amorphous to be seriously challenged or to challenge others.

But that’s not what open-mindedness means. Open-mindedness is simply the willingness to change or modify your beliefs when confronted with better arguments and evidence which contradict them. Far from requiring weak beliefs, open-mindedness requires you to have strongly held beliefs backed by some form of reasoning. You can’t be meaningfully open to changing your mind if you’re not committed to your position in the first place.

The principle invoked by Paul in Romans 14:5 has a broader application here: “One person esteems one day above another; another esteems every day alike. Let each be fully convinced in his own mind.” Right action doesn’t proceed from doubt, but from belief. If you don’t think your position is right, you shouldn’t hold that position.

How Can I Hold Strong Beliefs if I Might Be Wrong?

I think that the only reasonable position for someone to hold with respect to his own beliefs is to act under the assumption that he is right in each particular belief.

That may seem like an aggressive claim, given this basic fact of human existence: everyone is wrong, at least sometimes. But I’m not saying we should act like we’re always right. I’m saying that we must proceed under the assumption that our reasoned beliefs are correct, because to do otherwise is not to believe them at all.

The way to harmonize this seeming inconsistency—the need to act as if we’re right on one hand, and on the other hand the recognition of the fact that we’re sometimes wrong—is something described in a blog post I recently read as “epistemic humility.” Epistemic humility (“epistemology” being the study of knowledge) means acknowledging that your knowledge is incomplete, that “there are more things in heaven and earth, Horatio, than are dreamt of in your philosophy.” It doesn’t mean denying that you have knowledge or that your beliefs do accurately describe some features of reality.

In practice, having epistemic humility means I hold that each of my beliefs is correct, but I know that I’m not right about everything, so I’m open to revising any of them in the face of a better argument.

Being Wrong on an Important Belief

Perhaps it’s best to illustrate the process of thinking I’m right, being wrong, and changing my mind with a story.

The church I attended before college did a poor job of answering questions from its specific theological perspective in a compelling way. Yes, I was the kid who asked a lot of questions, complete with thought experiments in some cases.

Anyway, I got to college and was exposed to the new trend in evangelicalism of becoming Calvinist (the whole “Young, Restless, and Reformed” thing, if any of you remember). The messaging was very much, “all the theologically serious and reflective people are Calvinists, so are you predestined for greatness or Arminianism?” I didn’t know what these words were, necessarily, but I was serious and reflective (again, fun at parties), and I was pretty readily inclined to accept the idea of total depravity. The churches in the area that believed in Jesus were Calvinist; the Christian rappers were Calvinist; I was on board.

As a side note for readers who aren’t theological nerds: holding to Calvinism or a rival hypothesis has implications for free will, mechanisms of salvation, the problem of evil, the goodness of God, and more. It’s a central idea to one’s theology, not something you just change willy-nilly.

Now, being on board, for me, means being prepared to defend my position when, totally hypothetically here, my girlfriend doesn’t like it. By this point I was conversant in the strongest arguments for Calvinism, and so we began debating during junior year of college. I made the best arguments I could, but between my girlfriend (now wife) and the broad reading of C.S. Lewis (who often proves the trump card in our theological arguments) I did for my senior thesis, I changed my mind and rejected Calvinism in favor of my original position—two-and-a-half years later.

I don’t want to dogpile on Calvinism here, and I won’t give the Arminians false hope: I’m not on your team, either. The important part of this isn’t the details, but the general arc. I took on a new belief because it provided more evidence, I defended that belief, and I abandoned that belief after it became clear that I could no longer defend it (but I also didn’t just discard it easily).

Even now, though, I’m clear with others about the strengths of the Calvinist position. One of the main things in its favor is that it can “proof-text” with references to the Bible more easily than most positions. Many highly intelligent people over time have adopted Calvinism, and Calvin himself was no feeble mind.

When I hold a belief, I want to use the best arguments for it. I want it to be the case that, even if I change my mind, people still argue for that position using my arguments. I would have better arguments, presumably, and specific answers to the best challenges of that previous position, but those new arguments would be why I changed my mind in the first place.

There’s a reasonable question to be asked here: isn’t it scary to be open-minded while teaching others your beliefs? What if you change your mind and you’ve led all these people astray?

I don’t actually worry about this. If I’m teaching people certain beliefs, I’m hopefully also teaching them a certain kind of path of inquiry; I’m “showing my work” for how I got to where I am. If I change a belief, it’s because I’ve rejected or modified one of the premises I held to be true. If I’ve done my job, others can see what premise changed and why, and they can decide for themselves if my reasons for that are compelling. After all, it could indeed be the new reasoning which is flawed, and I who need led back to where I started.

Being wrong might be a failure, but it’s an unavoidable one, at least some of the time. What I can avoid is failing to pursue truth because I’m afraid I might be or become wrong. You’re wrong right now about something; so what’s to be afraid of? It’s only through examining and testing our beliefs can we stop being wrong, and we can hold the beliefs which remain with even more confidence.

The post On Being Wrong originally appeared at the Equal Rights Institute blog. Subscribe to our email list with the form below and get a FREE gift. Click here to learn more about our pro-life apologetics course, “Equipped for Life: A Fresh Approach to Conversations About Abortion.”