I’ll be honest, I’m not the biggest fan of the March for Life. Still, I’d never been, so I was excited to take the opportunity to go for the first time last year. Now, big gatherings aren’t exactly my thing, and the March is roughly 20 times the size of my hometown by population, so I was a little on edge to start. Still, I live in a very pro-choice part of the country (Boston), so there’s something inspiring about seeing hundreds of thousands of people gathering to proclaim that they oppose the wrongful killing of fetal humans. Do I think the March for Life is helping end abortion as much as some people seem to think it is? No, probably not. Do I think it’s, on the whole, positive? Sure.

Except for the signs. 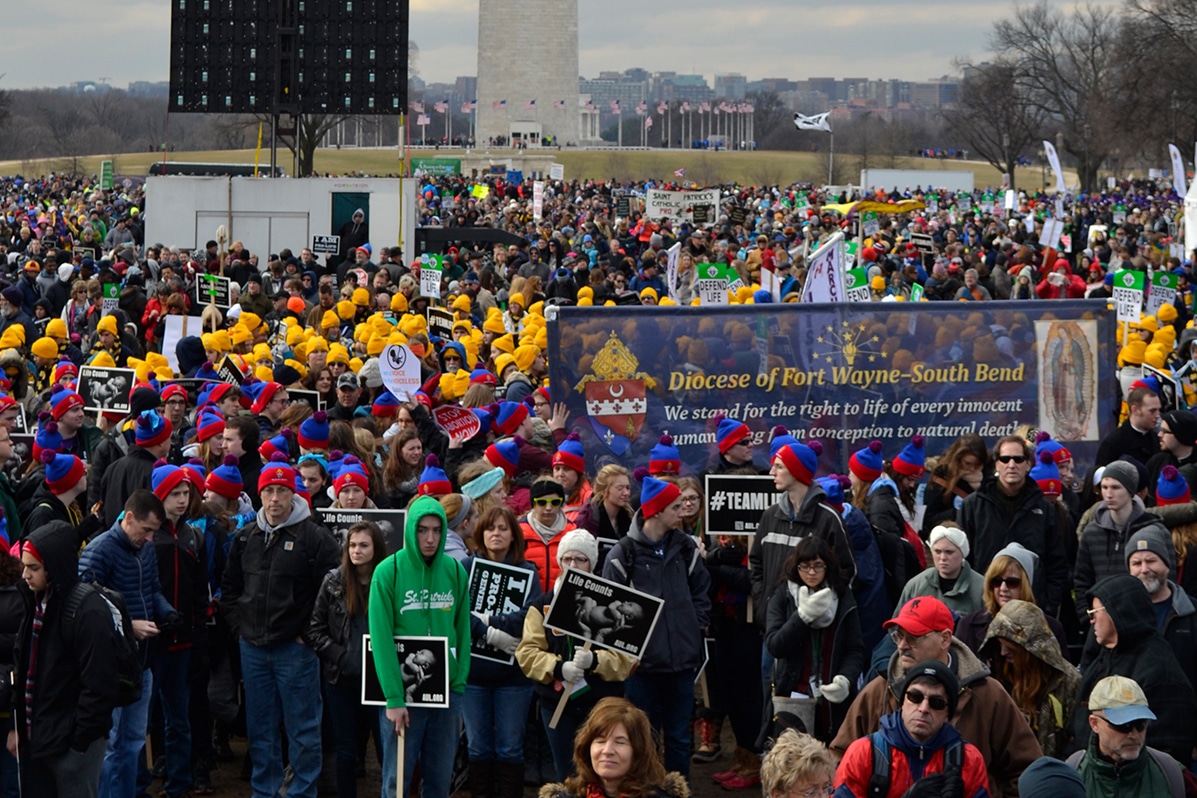 Some of the signs weren’t bad. The first signs I saw as we walked towards the pre-March rally were those passed out by particular groups; they may have had branding and some kind of slogan, but they were pretty neutral and “classically pro-life” with your average positive messaging. But I would classify many of the signs that I saw as actively detrimental to the pro-life cause.

Maybe you’ve never seen the signs or really thought about them in detail, or maybe you already sympathize with my frustrations. Either way, you might wonder why it matters for me to talk about all of these signs (and surely they’re not representative of the entire March)? Besides, you might say, the media consistently has neglected the event, so it’s not like anyone actually sees the signs.

What we see influences us. If the major pro-life event of the year is full of low-quality sloganeering that disposes us to be less thoughtful about the pro-life position and less compassionate to pro-choice people, we normalize ineffective and immoral behavior for the rest of the year. This is a self-reinforcing cycle capable of doing lasting damage to the pro-life movement. We are training ourselves in mediocrity.

These signs also send a message to others and ourselves that this is who we are and how we think. Bad signs speak poorly of the movement. If our signage indicates that we don’t understand what pro-choice people think and that we demonize them any chance we get, even if our movement as a whole isn’t really like that, we’re giving people every reason to believe those things about us. When your pro-choice friend sees your pictures on social media, the signs in the background could turn them off from ever having a good-faith conversation with you.

I want to share a few of the worst signs with you to illustrate why certain approaches to public messaging are problematic. Then, I’d like to give you a few ideas to raise our game so we can more effectively advocate for the pro-life position during marches and public demonstrations.

When we arrived at the rally and were waiting for the march to begin, I started to see some of the really bad homemade signs. There are a lot of high-school and college students at the March. Guess what happens when you give high schoolers posterboard and markers? That’s right, eventually some guy makes a dumb sign and raises it proudly for all to see. The main one I caught was a riff on the familiar pro-life misinterpretation of bodily rights arguments. You know, the meme about “your body, not your body?” Basically, it avoids addressing the full force of real bodily rights arguments in favor of abortion by attacking a pretend version of what pro-choicers are saying (i.e., straw-manning them). The meme doesn’t look good on Facebook, and it didn’t look better on a sign. I get it, it’s fun to “pwn the libs,” but committing a logical fallacy is probably not the best way to do that. It’s important to make sure we understand the pro-choice argument we’re responding to, and if you don’t know bodily rights arguments well enough to make a pithy sign, make one on personhood instead (might I suggest an equal rights theme?).

Pro-life Politics is More Than Trump

Another good example of poor decision-making with a homemade sign was a cartoon image of Hillary Clinton and Chuck Schumer leering menacingly over Trump’s shoulders with a syringe and forceps while he shelters a baby. The nicest thing I have to say about this sign is that maybe they put some thought into it; but if they put a little more thought into it, they wouldn’t have made it. What point does such a sign serve, except to provide lovely snapshots for “reporters” from Jezebel and The Guardian to demonize us with? Painting our political opponents as demonic caricatures and making Trump out to be a heroic baby-saver doesn’t reflect reality or help us get our message taken seriously.

One state Right-to-Life group really doubled down on this strategy and brought a bunch of signs with a cartoon Trump at a podium headlined “Make Babies Great Again.” I had the, uh, “privilege” of marching next to this group for most of the morning. (They weren’t the only group with this slogan, but the image makes theirs the most developed form of this example.) Maybe I missed something, but at what point did God make babies un-great? Also, I care about babies—we’re all there because we want to stop babies from being killed—but women are involved in this, too, and it doesn’t help us reach out to women in difficult circumstances who may be considering abortion when we choose a misogynist and serial philanderer as the cartoon avatar of the pro-life movement. Trump has done beneficial things (largely) for the pro-life movement at a policy level, but who we are and what we stand for is more than a single president, and we shouldn’t reduce ourselves to a singularly political march when we are protesting a holistic problem that goes beyond partisan lines.

We’re All on the Same Team Right?

These signs were all from the people marching together, but I haven’t yet touched on the counter-protestors. I’ll admit, I was a little nervous when I found out the “women’s march” was the next day, and I saw a couple pink hats on the train ride into DC. Imagine my surprise when none of the counter-protestors I saw were pro-choice! No, it was pro-life people standing on the side of the road with signs and bullhorns, protesting those they considered insufficiently pure in their pro-life credentials. Many of these signs basically served the purpose of attacking all the Catholics present, calling the Pope the Antichrist and such. I don’t know; most of the marchers were Catholic, many of the people doing pro-life work (such as our own staff member Rachel Crawford) are Catholic, and, frankly, the Catholics tend to be ahead of the rest of us on work in bioethics by a few decades. How does yelling at “papists” save babies? It’s not like these signs are making the Catholics who see them more likely to reconsider their theological views.

Hopefully, I’ve made my case that we have some work to do on our messaging. If our signs and slogans reflect incorrect or unclear thinking, we’re not going to convey the truth of the pro-life cause in a winsome or effective way. Fortunately, I don’t think this is a challenging problem for us to address. Thinking through our goals in advance and framing them within our pro-life worldview should eliminate most of the issues.

If you decide to hold a sign, try to maximize the effect your sign could have on those who will see pictures of you online or in-person at the March. Our messages should do more than let us laugh at our opponents or make us feel good; that isn’t why we march. Here are some considerations before making your own sign:

Here are some ideas that convey the reason we have the March for Life in a clear, concise way:

There will always be fringe or unreflective people with unhelpful signs, and those will always be the people who get photographed by the media outlets seeking to push a pro-abortion message. But instead of sinking closer to their level, we can make 99 percent of the movement winsome. Maybe I’ll get to write a follow-up article about the impact of all of the wonderful messages at the March in the near future!

The post [linked title] originally appeared at the Equal Rights Institute blog. Subscribe to our email list with the form below and get a FREE gift. Click here to learn more about our pro-life apologetics course, “Equipped for Life: A Fresh Approach to Conversations About Abortion.”