It is good to have close friendships with members of the opposite sex.

Relational apologetics is a topic I’ve been speaking about a lot this year. Often I tell the story of my friendship with Deanna Unyk as an illustration of what I’m encouraging, and then argue for why we should pursue friends, even if the person is the opposite gender.

I recently learned that some people who have heard me speak about Deanna have concerns about our friendship. First is that some people will think I’m a wimpy pro-lifer. After all, how could I be good friends with a pro-choice, lesbian atheist without compromising my beliefs when discussing topics like abortion or same-sex marriage? I’ll address that concern in a future post. Today I want to address the concern that I am “too close” to Deanna, that I’m even putting my marriage at risk.

I don’t usually take the time in my speeches to give a strong defense of guy-girl friendship. Frankly, I’m still learning the best ways to communicate with people about my friendship with Deanna. I don’t want my audience distracted by wondering, “Is his marriage unhealthy? Why does he care so much about a woman he’s not married to?” I’m making a few minor adjustments to the way I talk about Deanna in my speeches to minimize the possibility of being misunderstood.

There’s also a part of me that feels sad that a blog post defending guy-girl friendship is even necessary. While we’ve all seen the painful consequences of men and women falling into sexual sin, some people unfortunately assume that members of the opposite sex are more dangerous than they are worth in a friendship. Many of us have bought into an idea that is preached at us time and time again in movies and popular TV shows, that men and women CAN’T be friends without eventually sleeping with each other, or at least lusting for each other. According to this theory, whether it’s Ted and Robin or Harry and Sally, it is impossible for a man and a woman to have a lifelong, platonic friendship.

I don’t buy that.

While it is possible for people to fall into sin, guy-girl friendship can also be virtuous, God-honoring brother-sister friendship. 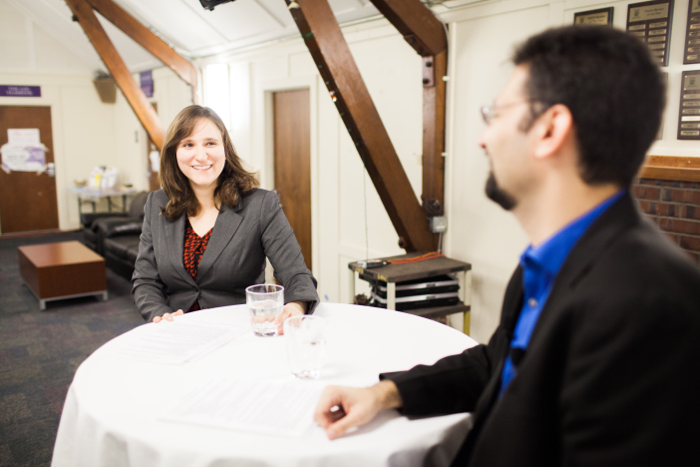 My friend Deanna Unyk and I enjoying each other’s company while speaking at the University of Portland.

Since I was very young, my closest friends have often been girls. God has brought wonderful women into my life time and time again who challenge me intellectually and spiritually. I am encouraged every time I talk to H to spend more time with God and to be more grateful for the blessings in my life. J has pushed me to live life more fully, think more carefully, and to take better care of myself emotionally. My life would be worse if I had kept my female friends at arms length my whole life!

When I look at Jesus’ life, I am inspired to think that guy-girl friendships aren’t merely  appropriate, male/female friendships can be healthy. Jesus went out of his way to befriend  women as equally valuable, image-bearing human beings in a time when nobody else did. As Dr. Alvin J. Schmidt writes in his book “How Christianity Changed the World,”

The extremely low status that the Greek, Roman, and Jewish woman had for centuries was radically affected by the appearance of Jesus Christ. His actions and teachings raised the status of women to new heights, often to the consternation and dismay of his friends and enemies. By word and deed, he went against the ancient, taken-for-granted beliefs and practices that defined woman as socially, intellectually, and spiritually inferior.

The humane and respectful way Jesus treated and responded to the Samaritan woman [at the well] (recorded in John 4) may not appear unusual to readers in today’s Western culture. Yet what he did was extremely unusual, even radical. He ignored the Jewish anti-Samaritan prejudices along with the prevailing view that saw women as inferior beings.

Jesus’ treatment of the woman at the well wasn’t just an anomaly either. Some of Jesus’ close friends were women as well, including Mary and Martha.

Your spouse should be comfortable with the friendship. My wife trusts me and is comfortable with my female friends. We have built a healthy marriage with good communication, so my wife has an environment where she can talk to me if she’s ever uncomfortable with one of my friends, regardless of their sex.

Your friends should not try to divide you and your spouse. It would be a big red flag if one of my female friends started insulting my wife, or tried to get me to complain about her. If the friendship is healthy, then my female friend will want to encourage me in my marriage, just as I will do for her if she’s married.

You shouldn’t touch your friends inappropriately. I think there are some forms of affection that are inappropriate in any context between two people who aren’t married. Guy-girl friends shouldn’t elicit lust for each other; they shouldn’t try to kiss or make-out with each other. This is clear.

“Perhaps the most unsatisfying hug ever invented.”
~ Jonalyn Fincher

For friends who are not that close, anything beyond a handshake or a “Christian side-hug” will probably be the natural comfort line for that friendship. For close friends, I think a bear hug can be perfectly appropriate. A bear hug, more than a side-hug, communicates trust, mutual good will, and tenderness in a way that can be very comforting without needing to be remotely sexual.

Again, I think that will be a personal conscience issue, and if you wouldn’t feel comfortable doing that, then don’t violate your conscience or your spouse’s conscience. I would suggest you to be careful not to immediately assume that a hug is a hint that two people want to be in bed together.

This topic is so much richer than the room I have for this post. My two favorite writers on this subject are Jonalyn Fincher and Dan Brennan, whose book can be found here. If you feel skeptical about this topic, I’d encourage you to start by checking out the helpful speech below that Jonalyn Fincher gave at Biola. Then, listen to the discussion she had about that speech with Biola’s Dr. Tim Muehlhoff, who had several concerns about the speech. The full audio is well worth buying, but you can watch several excerpts of it for free here and here.

Harry & Sally are Wrong: Why Christian Cross-Sex Friendships Need to Happen from Soulation on Vimeo.