This post was first published at Life Training Institute’s blog. The resource links at the end were updated in October, 2017.

While working last week with the Justice For All exhibit at Kennesaw State University, I got into a conversation with two students, Justin and Teesha, about moral relativism. There are few topics more difficult to discuss than moral relativism. This is partially because it’s a complicated topic already, but also because few people are open to changing their views on relativism. Even if a person is typically open-minded, the whole concept of relativism is that we can have differing views on a subject, yet we can both be right.

When I train students to respond to moral relativism, I tell them to start by asking a clarification question. Steve Wagner of JFA points out that there are two different types of relativism, so it’s best to ask, “do you believe morals are relative to individuals or cultures?”

If the person believes morals are relative to cultures, I’m going to ask, “then how can you judge the Nazi’s decision to slaughter the Jews?”

If the person believes morals are relative to individuals, I’m going to say, “then you can’t distinguish between a father who feeds his daughter and a father who molests his daughter, can you? They just have different preferences.”

I’m going to share with you an excerpt of my dialogue with Justin and his friend Teesha, in hopes that it will give you some “tools for your toolbox” to use the next time your friend says “morals are relative.” 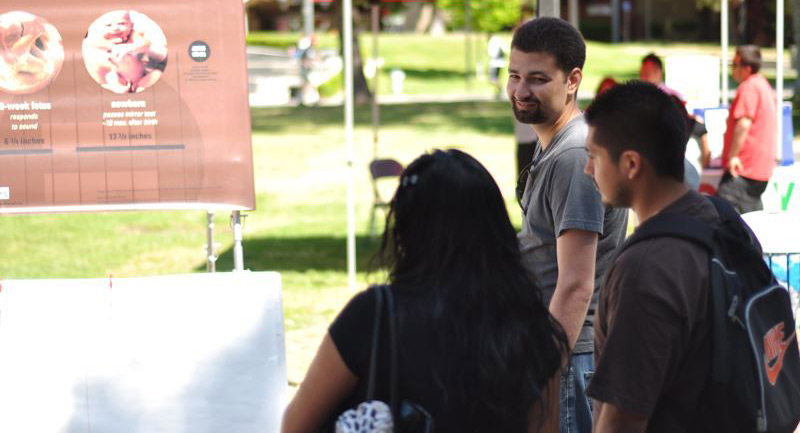 Justin:   There is no such thing as objective truth.

Josh:    Is that a true statement?

Josh:    I understand that, but is it true for me too, or is it just true for you?

Justin:   I don’t know, but it’s definitely true for me. There are some things I believe are wrong, but that doesn’t mean it’s wrong for everybody.

Josh:    Okay, well do you think we could agree that there are some things that are objectively wrong? Like rape, for example. Wouldn’t it be wrong for someone to rape Teesha?

Justin:   Well, it would be wrong for me.

Justin:   Yes, it’s wrong for me, but who am I to judge someone else?

(I could tell by Teesha’s body language that she was slowly coming to grips with the natural consequences of Justin’s worldview, and it was making her a little uncomfortable, but she didn’t say anything yet.)

Josh:    What about child prostitution? It happens all around the world. Can’t we at least agree that that’s really messed up?

Josh:    Yeah, but some people do. Some people think it’s okay to sell little girls’ bodies for sex with adult men. Isn’t that just wrong?

Justin:   Well, some people grow up with different parents and in a different culture than me. So I definitely wouldn’t do it, but who am I to judge another culture?

Josh:    I definitely agree people’s worldviews are partially shaped by their parents and culture, and that we should strive to think freely and clearly, and not just adopt whatever our parents taught us. (Justin nods approvingly.) But couldn’t an entire society be wrong about the “rightness” or “wrongness” of paying to have sex with 7-year-old girls?

Justin:   I think it’s wrong, but it might be right for them.

(Teesha interrupts that she disagrees with Justin. “Well I think that would be wrong!” she replied.)

Justin:   Something can be wrong to me, but that doesn’t make it wrong for someone else. Maybe it’s right to them. There is no objective right and wrong.

Josh:    Look, everybody used to think the earth was a flat disc on the back of a giant sea turtle. Were they right?

Justin:   It was right for them.

Josh:    Yes, but were we ever actually on the back of a giant sea turtle?

Josh:    Do you understand the Law of Non-Contradiction? It is not possible that something be both true and not true at the same time and in the same context.

Justin:   But there is no truth!

Josh:    See that?! You just made a truth statement, that there is no truth! I don’t even have to refute that. Your argument is refuting itself! It committed suicide. It was Dead On Arrival.

Teesha laughed, and we moved on to another topic, and went our separate ways a half hour later.

Why was I able to be so quick on my feet in that dialogue? Because I had already prepared for that kind of conversation. I read books like “Relativism: Feet Firmly Planted in Mid-Air” by Frank Beckwith and Greg Koukl. I listened to CD’s over and over on this topic, so I could master the material for myself. A lot of my responses were not even original! But they were tools in my toolbox, ready to be taken out when the opportunity came up.

I also chose to describe some of the most despicable acts I could think of. (I purposely left out the more graphic descriptions in this article, but suffice to say, I left little to the imagination.) I did this because it’s one thing to stand on a college campus and say there is no objective right and wrong, but it’s another thing to hear what it’s like for a 7-year-old to be forced to have sex with an adult man. There’s a reason we have a negative gut instinct when hearing things like that. It’s the kind of thing bioethicist Leon Kass refers to as “the wisdom of repugnance.”

So start preparing yourself for conversations like this! One way to do that is to subscribe to this blog or subscribe to our podcast, or even better, purchase our systematic course on pro-life apologetics, Equipped for Life: A Fresh Approach to Conversations About Abortion. Then you can be ready the next time someone tells you, “fetuses aren’t persons,” or “I’m personally pro-life but I wouldn’t tell someone else what to do with their body,” or even, “There is no truth. Morals are relative.”

Whatever you do, find a way to get involved. Moral relativism is one of the most destructive worldviews of the century. It’s become so popular that it’s even creeping into our churches unnoticed. It’s important that pro-lifers are able to combat it respectfully but effectively.