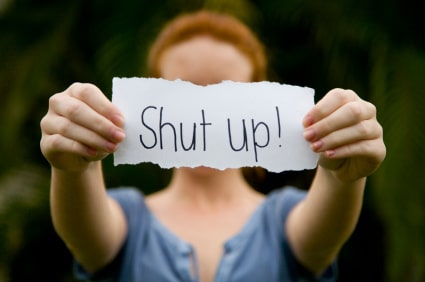 This is what most pro-life men hear
when this argument is made.

I’ll admit, it’s not always easy to respond to this argument without coming across like a jerk. There are some strong pro-choice arguments that I find difficult to grapple with when articulated well, but “You’re just a man” has got to be one of the lamest pro-choice arguments I’ve heard. There’s a part of me that just wants to respond, “Seriously? Is that the best you’ve got? Can we try to raise the level of dialogue here and respond to each other’s arguments instead of attacking each other? Tell you what. There are lots of pro-life women who use the same arguments I do. Just pretend I’m one of them and respond to their argument.”

In a sense, I’d be justified in saying that, but I think most people would just huff and puff while storming off.

So I’m going to write an imaginary dialogue with an approach that I think would be more effective than simply accusing the person of committing the “ad hominem fallacy,” (attacking the person and not the argument,) making a dialogue mistake that I’ve written about before. 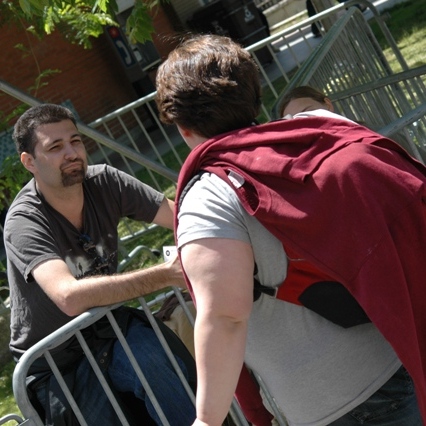 This pro-choice advocate at Pasadena City College made this argument to me.

Pro-Choice Advocate: How dare you be out here on our college campus talking about abortion. You’re just a man, and you have no right to be talking about a woman’s issue! You can never fully understand what it’s like to be pregnant.

Pro-Life Advocate:  I totally agree that I will never fully understand what it’s like to be pregnant. I mean, my wife has described being pregnant to me and I’ve been on that journey several times with her, both in situations where we’ve given birth to children and when we’ve miscarried, but I can’t have first-hand knowledge of the entire experience.

PC: I’m sorry to hear about your miscarriage.

PL: Thank you. I really appreciate that.

Now I want to correctly understand you. It sounds like you’re saying that if I can’t have first-hand knowledge of a person’s experience, then I can’t make moral judgments against what they do. Is that what you’re trying to say?

PC: That’s right. I’m fine with hearing what women have to say, but as a man, you’re in the unfortunate position of not being able to understand pregnancy enough to legitimize your opinion about abortion.

PL: Yeah, so that’s where we disagree. Let me give you an example of why I disagree, using a subject that’s not abortion, and I’d love to hear your thoughts.

PC: Yeah, that was awful.

So here’s the thing. I will never experience postpartum depression. I can become depressed, but I can’t experience postpartum depression. It doesn’t even make sense to me right now, and I have no idea what it’s like, but I believe that I can absolutely make a moral judgement that it was wrong for Andrea Yates to drown her kids, and I would support that action continuing to be against the law.

PC: Hmmm, I see what you mean.

PL: Can I offer one other thought about this for you to consider?

PL: There’s something about the statement that men’s opinions don’t count on abortion that bothers me a little. I think I know why though. I really hate it when I hear anti-abortion people say things that don’t treat women as equally valuable human beings. For example, I heard a guy once, who, when talking about women who had abortions, came across as very demeaning, even dehumanizing.

That really bothers me, because I believe women are equally valuable to men, regardless of whether or not they’ve participated in an abortion in the past. I think sexism is wrong because it focuses on a surface difference that distinguishes women from men while ignoring what they have in common, which is also the thing that morally matters: that they’re both human.

When I hear pro-choice people say that men have no right to speak their opinions about abortion, it kind of makes me feel the same way as when I hear an anti-abortion person say something sexist.

PC: Honestly, I hadn’t thought of it that way before. I’ve just heard so many times that men have no right to speak about this, and it made sense to me! I don’t want someone speaking into my life if they can’t understand what I’m going through.

PL: Yeah, I totally get that. I would probably be annoyed if someone who didn’t have any kids tried to give me precise parenting advice. I just think that’s a different category. Best techniques for parenting are in a wisdom category for me, but I see abortion as a moral issue.

Again, I could be wrong about abortion being morally wrong, and you could set me straight on that, but I think that will only happen if you hear my argument and counter it with science and philosophy, instead of just dismissing my point of view because I can’t experience pregnancy. To be honest, it’s just not a very persuasive way of arguing.

I’d like to suggest that we start over. I’d love to learn about why you’re pro-choice, and if you like I’d be glad to tell you a little about why I’m anti-abortion. Then we can try to compare our arguments. How does that sound?

Here are the main things I accomplished in that dialogue:

I think 1, 3, and 4 are the most important things to do when the other person believes that you can’t have a valid opinion about abortion unless you’re a woman. I think that would be much more effective than accusing the other person of committing an ad-hominem fallacy.

Thanks to Steve Wagner, Timothy Brahm and Gabi Vehrs for helping me improve this post.

The post Dialogue Tip: Responding to “You’re a Man, You Can’t Get Pregnant!” originally appeared at JoshBrahm.com. Subscribe to our email list with the form below and get a FREE gift. Click here to learn more about our pro-life apologetics course, “Equipped for Life: A Fresh Approach to Conversations About Abortion.”

Question: Pro-choice people, does this make you think differently about this pro-choice argument? Pro-life people, how have you responded to this argument in the past? What do you think of my approach?