I want to share one more dialogue story from our outreach last month at Aquinas College. Two fantastic students from the Students for Life club at University of Michigan, Rachel Crawford and Chloe Alberta, spoke to several pro-choice girls. This is what happened. 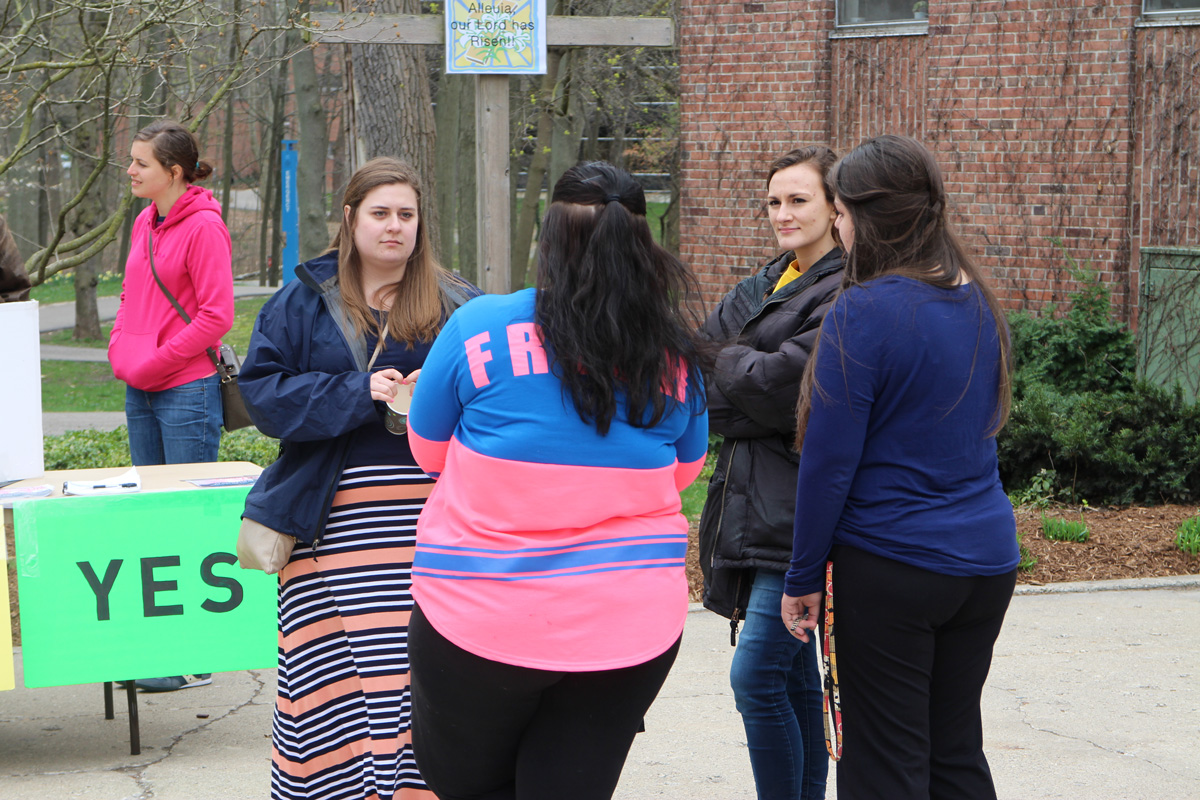 Chloe begins the story this way:

Towards the end of our day of outreach, Rachel and I had a conversation with two girls, who I’ll call Amber and Linda. Initially they were very hesitant to participate in the poll, because, as Amber informed us, they didn’t really like to think about the issue of abortion and didn’t really have an opinion on it.

I asked them in the name of having ALL the information possible, in order to make the MOST informed decision, would they be willing to look at a picture that shows what an abortion looks like? They declined because, “It’s probably really disturbing.” “You’re right,” I said. “It’s extremely disturbing and I really have trouble looking at them too.” I explained to them that I see that horrible image of the death of an unborn child, and I see one of the biggest human rights violations of our time. And I cannot be silent about that, and I think that is why it is so important to have an opinion about abortion and not let those human lives be looked over.

Later, Josh added something that I hadn’t thought of before. He said that if pro-lifers are right, thousands of innocent human lives are being ended, and if we are wrong, we are trying to make a medical procedure that’s morally tantamount to having a mole removed illegal. So either way, you should have an opinion about abortion. 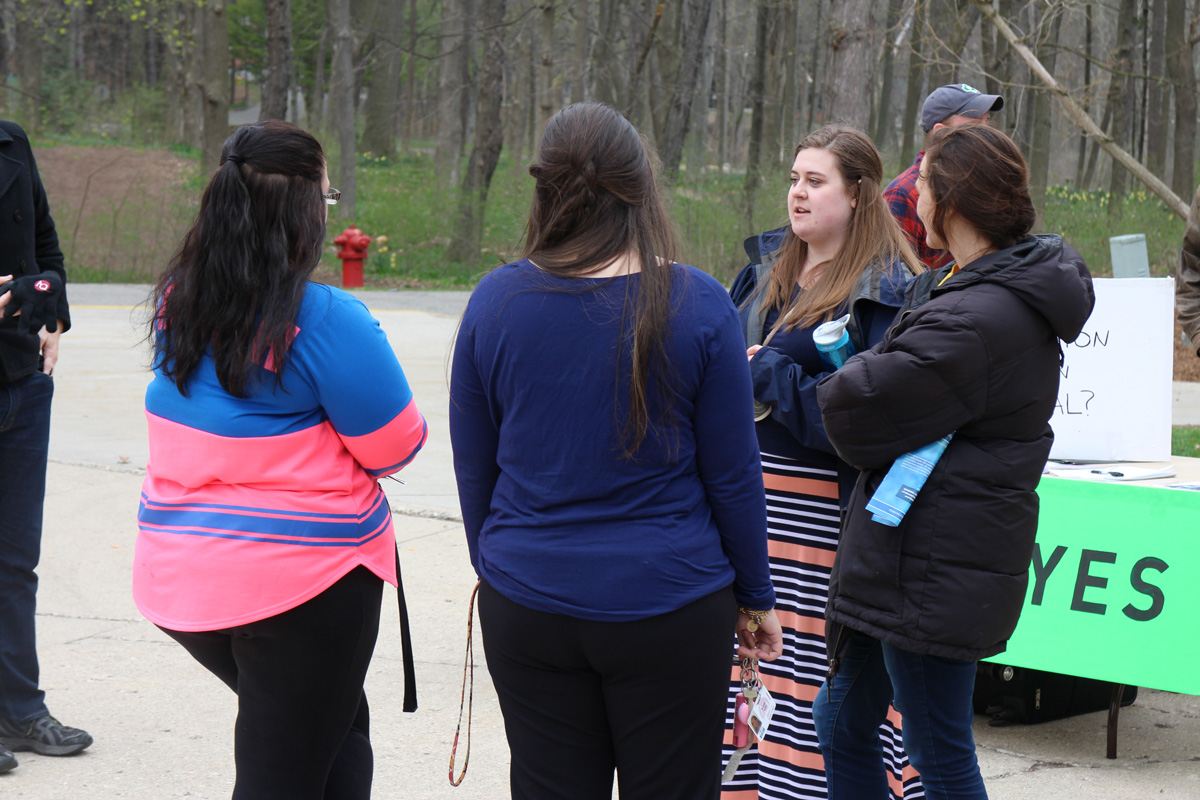 Rachel tells the next part of the story this way:

Amber and Chloe had a thought provoking conversation about graphic images and why abortion is an important issue. However, I wasn’t completely satisfied with them walking away with just that small pebble of thought in their shoe. So I asked the other girl, Linda, how she felt about abortion. (I also directly offered to show her a graphic image, because she didn’t verbally respond when Chloe had offered, but she too declined.)

She said: “I don’t know, I think it needs to be legal but I am not sure to the specifics. Like in the case of rape I think that a woman should have the right to have an abortion.”

I responded, “A sexual assault that results in a pregnancy is a super difficult thing to think about. I also think that sexual assault in general is a real problem. I really think we need more resources for women who are forced into a tough situation like that.” (small pause) “Can I ask you about something that may seem a little strange?”

I then used a thought experiment I heard from Josh Brahm: “So I want us to imagine a situation in which a woman has survived a rape and becomes pregnant. And let’s say she is getting all the help and healing that we can give her. Like let’s say she has support from family and friends as well as a good counselor to talk with. She chooses to keep her baby boy and parent him so the community assists her financially too. And everything seems to be going as good as it can for her, despite the terrible thing that she had to go through. Her attacker is even in jail! But then as her son is just turning two he starts to look like the man who raped her. His very appearance causes her a lot of emotional distress and she is so upset that she wants to kill her toddler. Do you think she should be able to?”

Linda: “Well, of course not, no. I don’t think she should, but abortion is different than that.”

Rachel: “Why is abortion different?”

Rachel: “Chloe, can I see that prenatal development chart?” Showing Linda and Amber: “So there is a certain weird logic in the way I think about this,” pointing at the embryo: “I think that this human embryo is just as valuable as this human toddler here. And because I think that they are morally equal, I logically argue that any reason that isn’t good enough for killing the toddler is also not good enough for killing the embryo. Does that make sense? I bring up this story because I want to see if we can agree that we all feel the same about bad situations, they are bad! But we disagree about whether or not these two humans are the same in a moral way!”

At this point there was a lot of nodding and a little giggling because I got really excited when I was explaining my view. 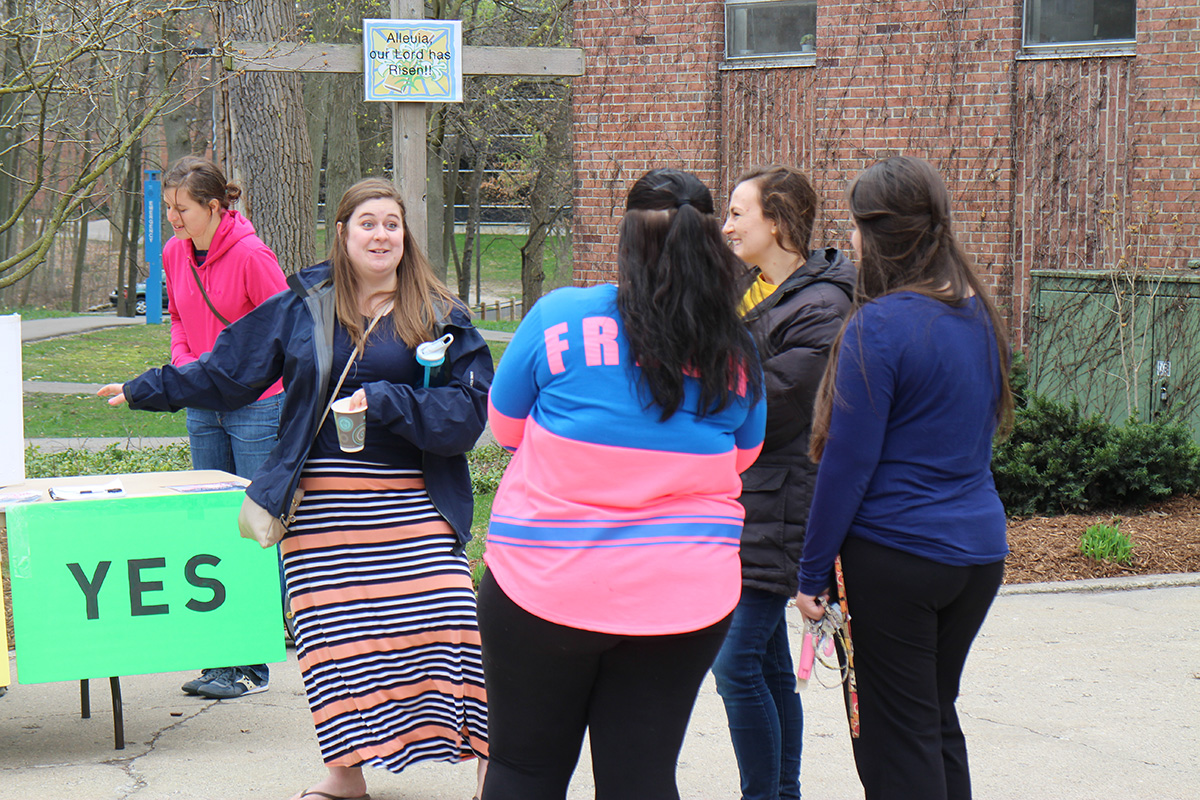 The excitement only increased as I went on:

Rachel: “So the real question is, why the heck am I so passionate about this issue of abortion? Because I think the unborn are people and because they are being discriminated against in a big way! Can I tell you why I think that?”

Amber and Linda agreed and were laughing a little at my ridiculously peppy tone. I like to tell equal rights arguments to a captivated audience and I find humor to be the quickest route to keeping the attention of the other person or people I am dialoguing with. 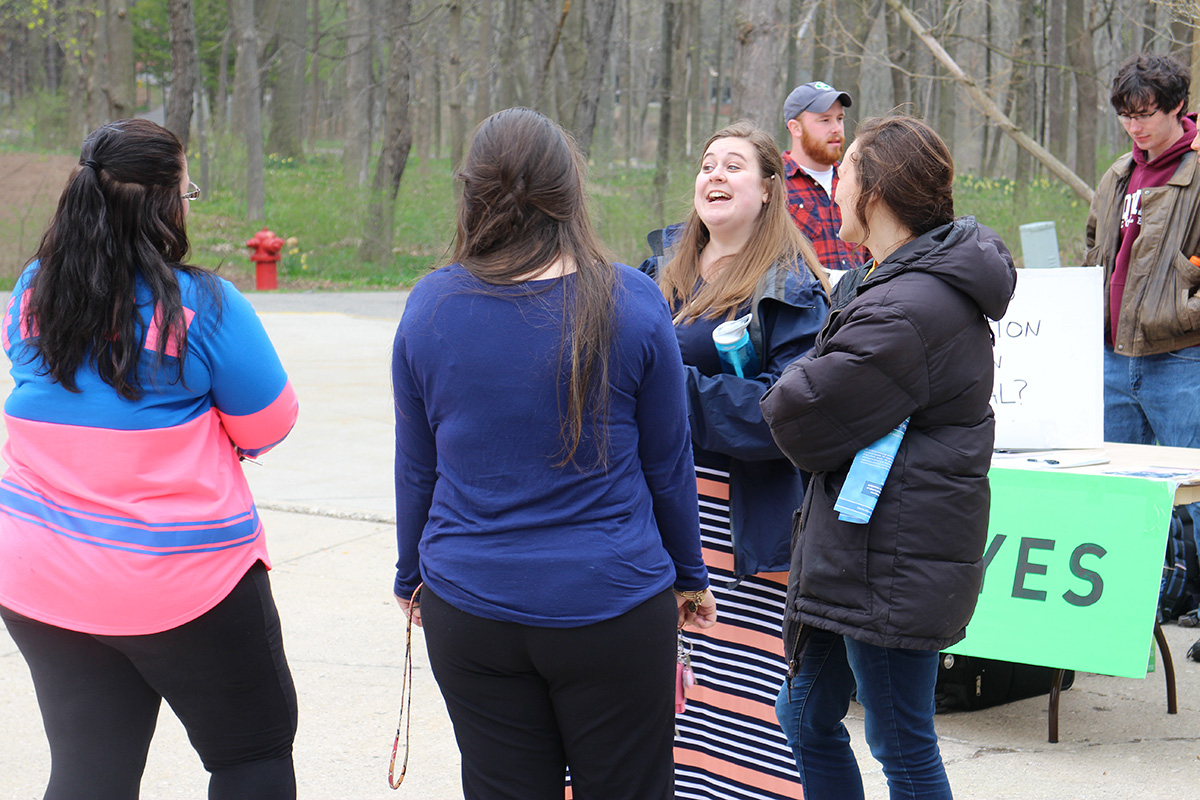 Amber and Linda both said yes so I continued: “Okay, I think so too! I DON’T think that society has always agreed with us though. Look at our history textbooks from high school and you’ll see that there have been some groups of humans that have been denied basic personhood rights in recent history. Blacks, Jews, and women have all been degraded as less than human in different cultures, but through social justice activists those groups are now recognized and protected as people. The reason I can see for the past discrimination of those groups is because people in power were assigning human rights based on things that didn’t matter! Race is not a good reason to deny someone the right to be free. Neither is a person’s sex! I don’t think it should be ability or intelligence or anything else that makes people different. For our rights to be equal, they have to be allotted based on something that we share equally. What I mean by all of this is that I can see there is a really big group of really tiny people who don’t have those basic human rights. That is why I am out here all day. That’s why I get super concerned when people don’t want to talk about abortion. What do you think about it?” (Click here to learn more about the most undervalued argument in the pro-life movement.)

Amber and Linda seemed like they were thinking a lot about everything I had just said. Taking pro-life philosophy and translating it into applicable terms can be difficult. They didn’t have an immediate response but still wanted to talk.

By the end of the conversation I think we gave them a new image of what the pro-life movement is, and I know that they will not feel so indifferent about abortion anymore. We talked about how much love pregnant women deserve, which they do not always receive in this day and age, especially on college campuses. This is where I always get really excited, because pro-choice people never expect to hear that I dedicate a huge amount of my time to the Pregnant on Campus Initiative in the name of helping pregnant students at the University of Michigan. I made sure Linda knew that I truly appreciated how much she cared about women being loved and accepted and achieving their goals. 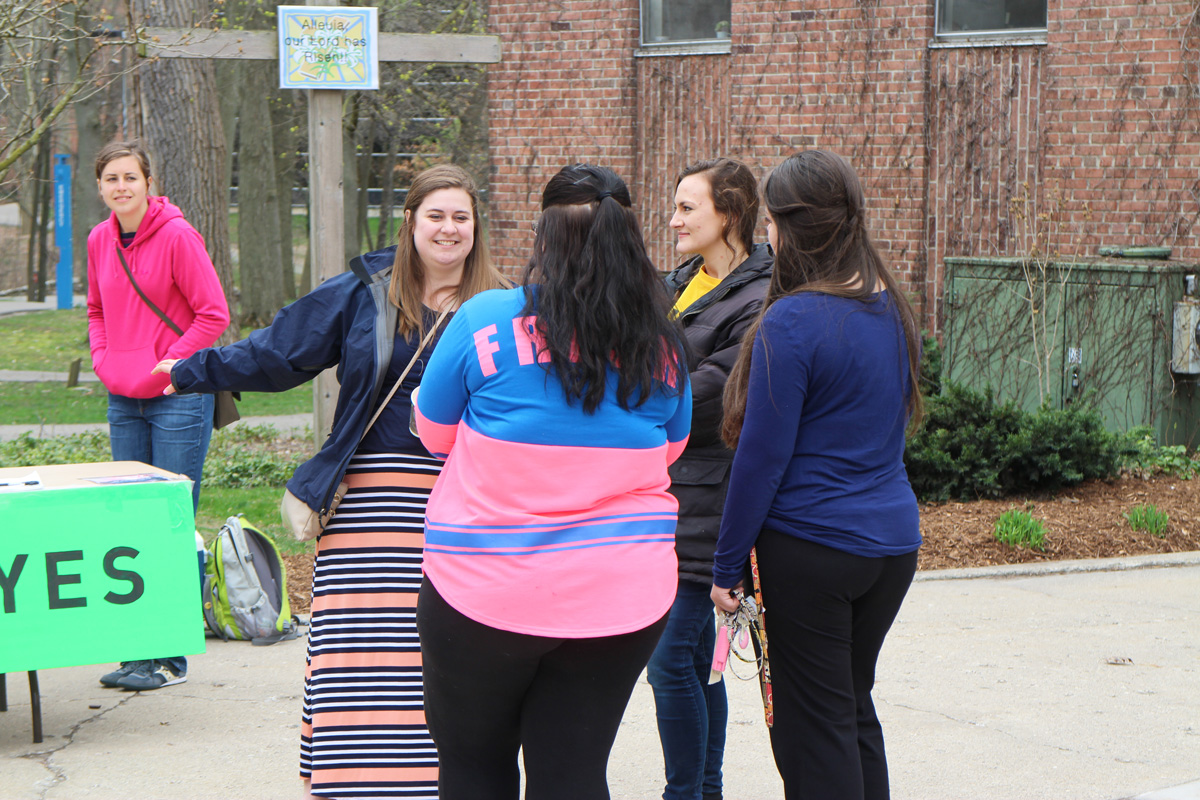 Chloe ends the story this way:

After talking to Linda for quite a while, she shared with us that she had known since she was fifteen that she would be unable to have children. I was incredibly touched that she felt comfortable enough talking to us that she could share such an intimate detail of her life. It was another reminder for me of how important it is to show kindness to every person we talk to about abortion, because even if they walk away more pro-choice than ever, they will know that at least some pro-lifers genuinely care about people – and not just the tiny ones who haven’t yet been born.

The post “Dialogue Story: Rachel and Chloe at Aquinas College” originally appeared at the Equal Rights Institute blog. Subscribe to our email list with the form below and get a FREE gift. Click here to learn more about our pro-life apologetics course, “Equipped for Life: A Fresh Approach to Conversations About Abortion.”