Yesterday I had the opportunity to catch up with one of my closest childhood friends. Our conversation quickly turned to the election because he and his wife have been agonizing over what to do with their votes. These are very godly, very pro-life people. They take this decision seriously and are still trying to figure what to do. My guess is that they will probably begrudgingly vote for Trump, and I won’t.

And that’s okay. We will still love each other after the election.

The question I’ve been concerned about lately is: can pro-life people do the same with their friends and colleagues who make different voting decisions next month? Or will the pro-life movement face an unprecedented and catastrophic level of division?

I told my friend yesterday, “I just want this election to be over. We’re all sick of it. But here’s my hope for what happens next: I hope that all of the people who have agonized over this decision can come together afterward, even though some of their friends also agonized over the decision and made a different choice.”

This election has been a uniquely divisive one. It’s probably the toughest election pro-life advocates have ever had to deal with. We are all doing our best in an awful situation.

I’m not saying both sides are right. On the question of whether to vote for Trump, there is an actual right decision and an actual wrong decision, but it is admittedly very difficult to determine which decision is right. I definitely have an opinion, but I believe reasonable and virtuous people can disagree.

To be clear, there are pro-life people who have absolutely sold out to Trump and have lied to defend him. That is not remotely defensible and such people should not be trusted in the future. This piece isn’t about them. This piece is about most people in the pro-life movement, who know and acknowledge that Trump is awful and who struggle with whether or not to vote for him. The pro-life movement should not open its arms to liars, but we can work with honest people who are making a different decision when faced with this hard judgment call.

And we have to. Regardless of what happens in November, the pro-life movement needs to unify. [Tweet that!]

I think we can do this, but I have strong concerns. I know several pro-life leaders who have said that they can’t imagine how anybody could actually be pro-life and not vote for Trump unless they have no understanding of how politics works. There’s a “No True Pro-Lifer” thing going on here, and I’m concerned about the effect of an attitude like that after the election.

We all have a series of decisions to make for the next four years. We can spend them taking jabs at each other with subtle or not-so-subtle comments about how everything going wrong is such and such pro-lifer’s fault, or we can exercise self-control. Every remark you make to alienate well-meaning but misguided people from the work of saving babies is a remark for which you are culpable. I don’t think I’ve always been careful enough about this myself, but I’m committing to be careful about it in the future. I know you’re frustrated with people. I’m frustrated with people too. If you must remark on the decisions people have made this election, at least do it respectfully, and acknowledge the good intentions of people on the other side.

The pro-life movement is already divided enough. We can all do better work if we don’t alienate each other.

The time to decide to be united is not after the election. It’s right now. Will you commit today on your Facebook wall to unite with the people in this movement who decide to vote differently than you? I think thousands of pro-life people doing that could actually have an effect on how divisive this election has been at the grassroots level. We can’t change how nasty the politicians are towards each other, but we can change how everyday pro-lifers are towards each other.

Let’s unite and make a strong statement today. You can write your own or just copy and paste this one. Alternatively, you could download and post the graphic below that has been optimized for Facebook timelines.

If you’re pro-life, I will not hold your voting decisions this year against you in the future. I will treat you with no less dignity than I did before. I will not say ‘I told you so,’ no matter what happens next. I will choose to be gracious and understanding to you in my thoughts, words, and actions. I will assume the best of you, that you did the best you could under difficult circumstances and I will respect your intentions. When I’m frustrated, I will direct my frustration towards the people who support the killing of babies, not my friends who disagree with me on the best political strategy to defend babies. 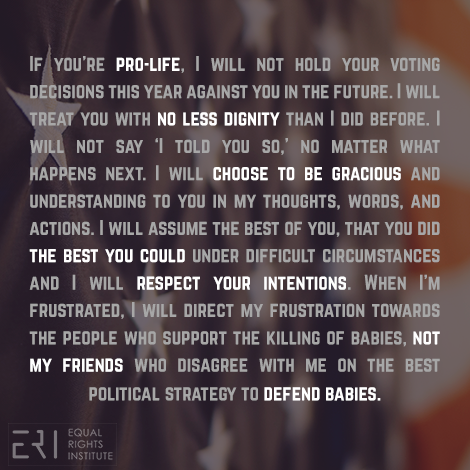 The post “Choosing Unity: The Pro-Life Movement after November 8th” originally appeared at the Equal Rights Institute blog. Learn more about their pro-life apologetics course, “Equipped for Life: A Fresh Approach to Conversations About Abortion.”