In the spring of 2013 I was standing in front of the Justice For All Exhibit at Colorado State University, trying to start conversations about abortion. I was struggling that day because most of the time I tried to invite someone into a conversation, they reacted suspiciously. I decided to try something different. 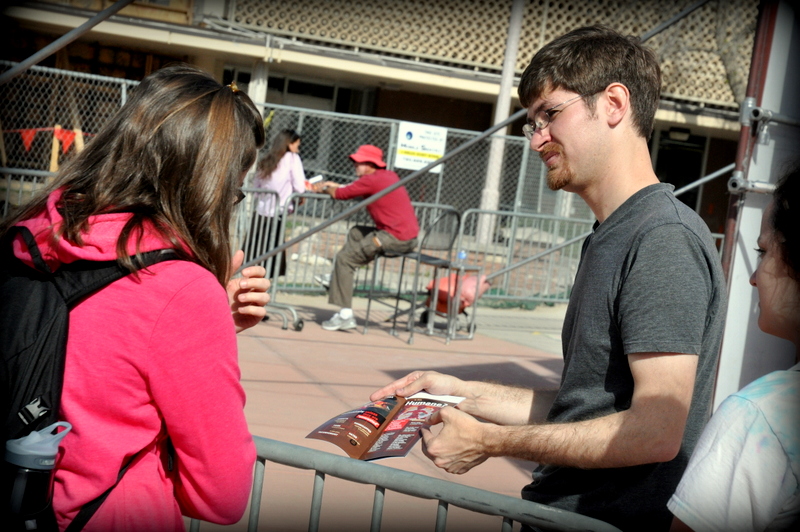 Photo credit: Justice For All. Used with permission.

Four girls walked past me and I called out, “Hey, would you like to share your opinion about abortion?” Three of them ignored me and kept walking, but one of them, who I’ll call “Jill,” turned and paused, trying to decide if she wanted to take the bait. Her friends, now a couple of yards ahead of her, called back, “Come on, you don’t want to talk to that guy!”

I looked Jill right into her eyes and said, “If I promise to only ask clarification questions to try to understand your view unless you give me permission to do otherwise, will you talk to me and share your view?”

She thought about my offer for a few seconds and then hesitantly said, “okay,” and walked over. For the first ten minutes of our conversation we discussed difficult circumstances women find themselves in, and the nature of the unborn. She made some indefensible claims about embryology, the kinds of claims I couldn’t correct without making statements. I asked her if I could make some statements to clarify some things she was getting wrong, and she easily said “yes.” It only took me a few minutes to show her I was compassionate and reasonable, so by then we had built enough rapport and trust that she was willing to listen. Jill had to go to class about fifteen minutes later, but we had a valuable twenty-five minute conversation in which I helped her to understand why people like me are pro-life and what the unborn are.

I don’t usually want to make that specific agreement with people because it really ties my hands, but some people are timid enough that it’s necessary for the conversation to be possible. I do make other little agreements all the time in my conversations though, and you should too. More frequent examples of the kinds of agreements I make are:

“You keep interrupting me. I want to hear what you have to say, but the conversation isn’t working if you won’t let me get a word in edgewise. Could we like, take turns or something?”

“Could I take one minute to share with you why I’m pro-life?”

When I ask this kind of question, I’m asking the person to make an agreement with me to let me talk to them. If they say “no” to any such question, then our conversation is about to end. They are no longer able to just push me around in the conversation and pretend they aren’t being pushy. They have to actually say “No, I’m so unreasonable that I refuse to let you get a word in,” in which case I’ll just end the conversation. If they say “yes” to any such question, then they also can’t push me around anymore because we’ve made an agreement and people generally don’t want to break their word. And if they try to break their word, I’ll graciously call them out on it. (To learn more about how I do that, see this post.)

Little conversational agreements create clarity about the kind of conversation you’re having. This is especially helpful with difficult people, because it clarifies for you and for them that they’re being difficult and calls them to a higher standard of dialogue.[Tweet that]

These agreements are also helpful because they give conversations structure and order. Sometimes discussing complicated topics is really difficult because they can easily become chaotic and confusing. Many pro-choice people don’t understand their own views that well. They have lots of random thoughts but they don’t have any kind of structure to organize those thoughts, so they just keep throwing their thoughts out almost at random. Making little conversational agreements allows you to guide the conversation without being heavy-handed about it. You aren’t saying, “HEY! I’m going to be in charge of the conversation!” It’s still a democratic conversation, both parties have an equal vote, but you’re making a clear suggestion that they agree with you on what you both should do in the conversation.

And of course, with people like Jill, a more extreme agreement can give her the chance to experience a conversation she wouldn’t have had otherwise. People are different, so they have different needs. Tailor your approach to meet their needs.

Question: What other tips would you give to bring structure and clarity to a dialogue? Share them in the comments below!

The post “Bring Structure to Your Dialogues by Making Little Agreements” originally appeared at the Equal Rights Institute blog. Subscribe to our email list with the form below and get a FREE gift. Click here to learn more about our pro-life apologetics course, “Equipped for Life: A Fresh Approach to Conversations About Abortion.”