In my last post I talked about something I’ve been noticing recently, that people, especially pro-life nerds like me, are tempted to talk about logical fallacies all the time in conversation. There are several dangers to this. I’ve argued already that the first danger is accusing somebody of a logical fallacy when they didn’t actually commit one.

If you dedicate yourself to educating yourself on what the logical fallacies actually are before bringing them up, you will be a more effective debater. But there’s a good, better, best aspect to exposing logical fallacies while creating good dialogues with people.

My friend and colleague Trent Horn from Catholic Answers talked about this on an episode of Life Report. I’ll paraphrase what he said.

I would encourage people to not say ‘you committed X fallacy’ because it’s terribly presumptuous and arrogant and most people don’t appreciate talking to someone who points out every little fallacy they make. Instead you should follow Greg Koukl’s tactics and Justice For All’s training and ask, “why do you think that?” And then continue to ask follow up questions.

As Trent suggests, you could ask whether a bad person could be right about something. That’s so much better than accusing them of making an ad hominem fallacy!

Confession time: it was only a few months ago that I responded to somebody who posted a comment on my Facebook profile by telling them that it appeared they were committing the fallacy of post hoc ergo propter hoc and included this link so they could educate themselves and not make that mistake anymore.

I’m cringing as I write this. Yeah, I really did that. 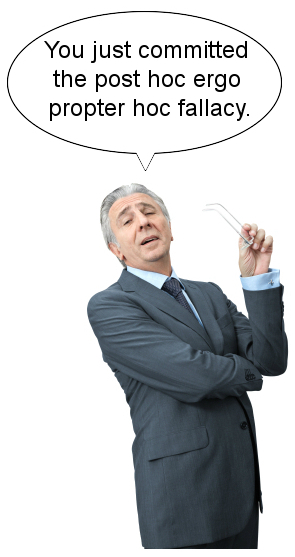 If you’re using Latin during a debate,
you probably sound like a jerk.

You know what would have been better? I could have said something like this: “I want to understand your argument, but I’m not sure I do. What it sounds like you’re saying is that because this thing happened after this other thing, that the first thing caused it. Am I misunderstanding you? I don’t want to put words in your mouth.”

Do you see the difference? It’s not easy though. Easy is naming the fallacy. Hard, but better, is being able to think to yourself, “I believe he just committed the genetic fallacy,” and then thinking of questions to ask with an open heart that will help the person see the problem with their reasoning. You could ask, “I want to understand you. Can I ask a clarification question? It sounds like you’re implying that because this person is biased, their argument must be wrong. Is that what you’re saying?”

But to do that you really need to understand what the fallacies are, because that will better prepare you to ask the right kinds of questions when a fallacy is committed.

I know there are people reading this that are very skeptical of this entire idea because they like telling people about their fallacies. If that’s you, I want to challenge you with this question: does pointing out every logical fallacy help you to create an atmosphere of productive dialogue, helping you persuade the person you’re talking to, or does it merely serve to stroke your ego and make you feel like you’ve won?

As Trent said, I think this sounds more like what Paul is talking about in 1 Peter 3:15, to be ready to give a defense for the hope that is within you, BUT with gentleness and reverence.

You can watch the video below or download the MP3 version for more thoughts on recognizing logical fallacies, including a discussion on the most common fallacies pro-choice and pro-life people make.

Thanks again to my brother Timothy for giving me ideas that made this post a lot better than the first draft was.

Question: What are some other ways to graciously identify and respond to logical fallacies? I’d love to read your thoughts in the comments!