I have, for the most part, avoided commenting publicly on Abolish Human Abortion. (From what I hear, fewer and fewer people take them seriously as their anti-Catholic views become more public as well their extreme arguments that the pro-life movement is to blame for abortion being legal.) I feel the need to say something now though, because they just publicly attacked my friends, and they did it with particularly bad reasoning. This blog is about helping pro-life people to become more persuasive and less weird, so let’s attempt to apply some clear thinking to AHA’s attack on Justice For All. 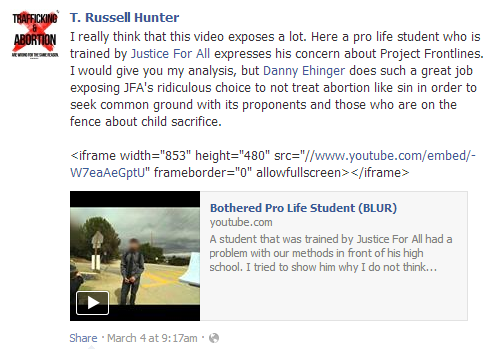 The link is to a video of AHA-member Danny Ehinger talking to a pro-life student who had gone through a previous JFA training, who expressed some concerns about AHA’s activism methods. The student explains that he’s all for getting people talking about abortion, but he felt like there were better results when JFA came on campus because some good conversations had taken place, whereas on this day the classroom discussions were a lot more heated and tended to end with students screaming and nearly getting kicked out of class.

The student expresses a concern about little kids seeing the signs, and encourages AHA to use more questions on their signs to create dialogue as opposed to just putting statements on their graphic signs.

Danny interrupts him and makes a very shrewd debating move:

So, your main concern, from what I’m hearing, is the other students that are getting angry about it.

And so that’s where we have a little bit of a difference. My main concern is the 3,500 babies who are going to be murdered today.

I’m okay with [JFA’s] premise of ‘We want to talk intelligibly to people and nicely to people.’ However, my question is the root why, why are they doing what they’re doing?

So this is the analogy I kind of came up with. Imagine if you’re in class, okay? And, there’s 50 students. And you hear gunshots, you see gunfire in your class. You hear people are being killed, okay? Half of the class gets up and says, ‘That’s wrong! We have to stop it!’ The other half of the class gets up and says, ‘No, you should have a right to do it!’ The teacher gets up, and this is what I think Justice For All is doing, ‘Let’s talk about this intelligibly.’ Is that the right behavior when there’s a gunman shooting kids?

And when the student goes to say, “That’s different,” Danny ignores him and restates the original question, which unfortunately gets the student to accept Danny’s premise.

What we need to do as Christians is stop talking about something. Because when we say, if I told you, ‘Do you like this grass?’ We could have a talk about it and we’re elevating the grass, kind of, to a place of it could be good or it could be bad… When our premise is ‘Let’s go and spread how to talk about abortion, we are making abortion higher than it ought to be. What we should be saying is, ‘Abortion is wrong and we ought to end it.’

Here are four problems with AHA attacking JFA with these arguments: 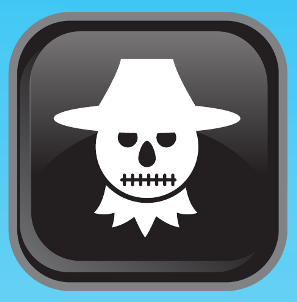 This wasn’t an even exchange of ideas. Danny straw-manned the kid with his, “Well, I actually care about abortion,” trick and then launched into a faulty analogy and refused to hear why the student thought the analogy was faulty. Sadly, it worked. He made a high school student look like an inconsistent pro-lifer who doesn’t really care about abortion very much while making himself appear as this wonderful abolitionist who actually cares about aborted children.

I have friends who have experienced similar tactics from AHA and I’ve experienced it myself when debating AHA online, which is why I don’t do that anymore.

The situation pro-lifers find themselves in is not one where suddenly a gunman bursts onto the scene and starts shooting kids. The situation is more like this:

Infanticide becomes legal in 2073, and remains legal for 41 years with the country split on it. Moral relativism has so invaded society that a huge number of people don’t believe they have the right to tell somebody else what they should and shouldn’t do. The pro-lifers are going against billion-dollar pro-infanticide lobbying groups, and not always communicating their case with the most persuasive arguments. Even so, they’re finally gaining momentum in both public opinion and through incremental state restrictions on infanticide. Their ultimate goal is abolishing infanticide altogether.

What should pro-lifers do in that situation? Exactly what the pro-life movement is doing now: Talking to people and changing as many minds as possible so that we can protect children through the law. That’s exactly how every effective social reform movement has changed culture in the past. (For more on AHA’s revision of abolitionist history, check out this piece from Jonathan Van Maren and this follow-up.)

What would I do if I were in a classroom when a gunman burst in shooting? I’d hide and call the police, and if I was feeling particularly like John McClane that day, maybe I’d even tackle the gunman.

Here’s what I wouldn’t do: Merely stand outside the school with a 4-foot graphic anti-gun-violence sign. That makes me think AHA doesn’t believe their own analogy either. I’ve heard bad stories of their sidewalk counseling techniques from several sources, but I don’t think they’re tackling pro-choice people to the ground and yelling in their face, “STOP KILLING PEOPLE!!!” but that’s what you do with a gunman in a classroom.

Like JFA’s staff and volunteers, AHA’s activists talk to people about abortion. They also encourage pro-lifers to talk about abortion a certain way. (Don’t use the term “pro-life;” don’t support incremental legislation, do use the Bible in every conversation, do talk about abolitionists, do use graphic pictures when possible, do publicly call out pro-life organizations that don’t agree with our strategy, etc.)

Even in this video, Danny is talking to this student about the abortion situation, and what people should do about it. I think his premises and conclusion are off, but notice that Danny doesn’t yell at every person who walks by, “DON’T ASK ME ABOUT WHAT I’M DOING! HELP ME STOP THE KILLING! NOW!!!” 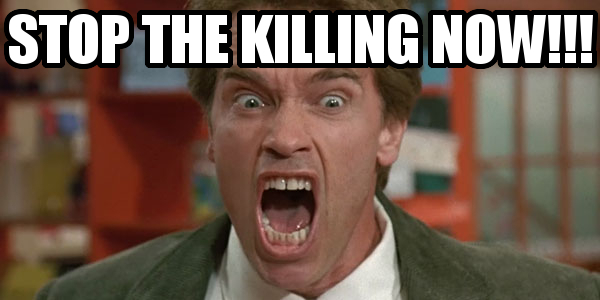 It doesn’t seem like they can get their story straight. In the video Danny says, “I’m okay with [JFA’s] premise of ‘we want to talk intelligibly to people,’” and then he makes his analogy arguing that pro-lifers should stop being like a teacher that talks to people about child killing.

In the thread under Russell Hunter’s Facebook post Danny says, “[JFA’s] words are fine and the idea of learning to speak correctly about the issue is not bad,” but Hunter calls JFA’s attempts to find common ground in their dialogues with pro-choice people “ridiculous” and “not treating abortion as sin.”

Which is it? Get your leaders together and decide which activities you’re opposed to before attacking another organization, Russell.

4: AHA is ignorantly bearing false witness against another pro-life organization.

In Russell Hunter’s Facebook post, he accuses JFA of being “ridiculous” for “not treating abortion as sin.” In the thread below Hunter’s post, Danny says, “The problem is it seems like JFA is not conveying the appropriate urgency in regard to the sin.”

Really? Because I can’t think of a pro-life organization that makes LESS sense for AHA to attack than Justice For All.

JFA doesn’t merely teach people to talk about abortion persuasively, they start their 6-hour training seminar by labeling abortion as, you guessed it, “sin.” They talk about the cross and what the Good News of Jesus means for people who have, in their own words, “sinned on abortion.” I know this because not only have I been present at over a dozen JFA trainings, I’ve learned their script for that section and have delivered it several times myself.

But that’s not all. Then they go to college campuses with various graphic exhibits, to expose the reality of abortion to people AND attempt to draw people to them so that they can get into dialogues about abortion. That’s exactly what AHA does with “Project Frontlines” that Danny is engaged in during this video! 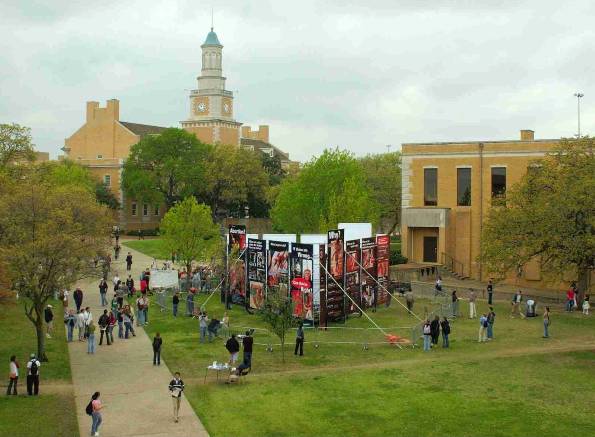 See pictures of the entire JFA exhibit at http://www.jfaweb.org/Media.html.

AHA is not the only organization using graphic pictures in public. JFA does that too.

JFA is not the only organization talking to passers-by about abortion. AHA does that too.

It seems to me that the most obvious difference while on campus is that JFA’s signs are…bigger. AHA’s signs are about 4-feet tall, and JFA’s large exhibit is 18-feet tall. I bet that exhibit shows the reality of abortion to more students and results in more dialogues about abortion as well. Even if JFA didn’t train dozens of people ahead of time to have persuasive dialogues on campus and they only showed up with their staff and exhibit, they would be doing exactly the same thing AHA is doing, and they’d still be getting better results.

AHA doesn’t like that JFA teaches people to not start every conversation with Bible verses. Fine. I don’t have room in this post to get into that debate. If you really think the most effective way to persuade a pro-abortion-choice atheist is to quote Psalm 139 and Jeremiah 1:5 at them, be my guest. I’ve seen it done. I just haven’t seen it be very effective. On the other hand, my colleagues and I do have a lot of personal stories of people changing their mind because I used science and philosophy to show them how reasonable the Christian worldview actually is.

I’m not sure if AHA wants a reputation of being troublemakers, or if that’s just what has happened naturally. But when they go after another pro-life organization that uses graphic pictures in public as well as trains people to dialogue more persuasively, it looks a lot like AHA is seeking opportunities to publicly attack as many pro-life groups as they can. Unfortunately, they’re also bearing false witness against other people and organizations, and I hope this group of people that takes the Bible very seriously will consider apologizing to Justice For All for accusing them of not treating abortion as sin.