We have added eight new lesson videos to the Equipped for Life Course that will help you take the pro-life defense of fetal personhood to the next level. This 90-minute module is the result of a four-year research project that our philosophy team has been working on behind the scenes. In these videos, we teach an advanced version of the Equal Rights Argument that gives a philosophically thorough explanation as to why human embryos should be considered valuable persons with serious moral status. 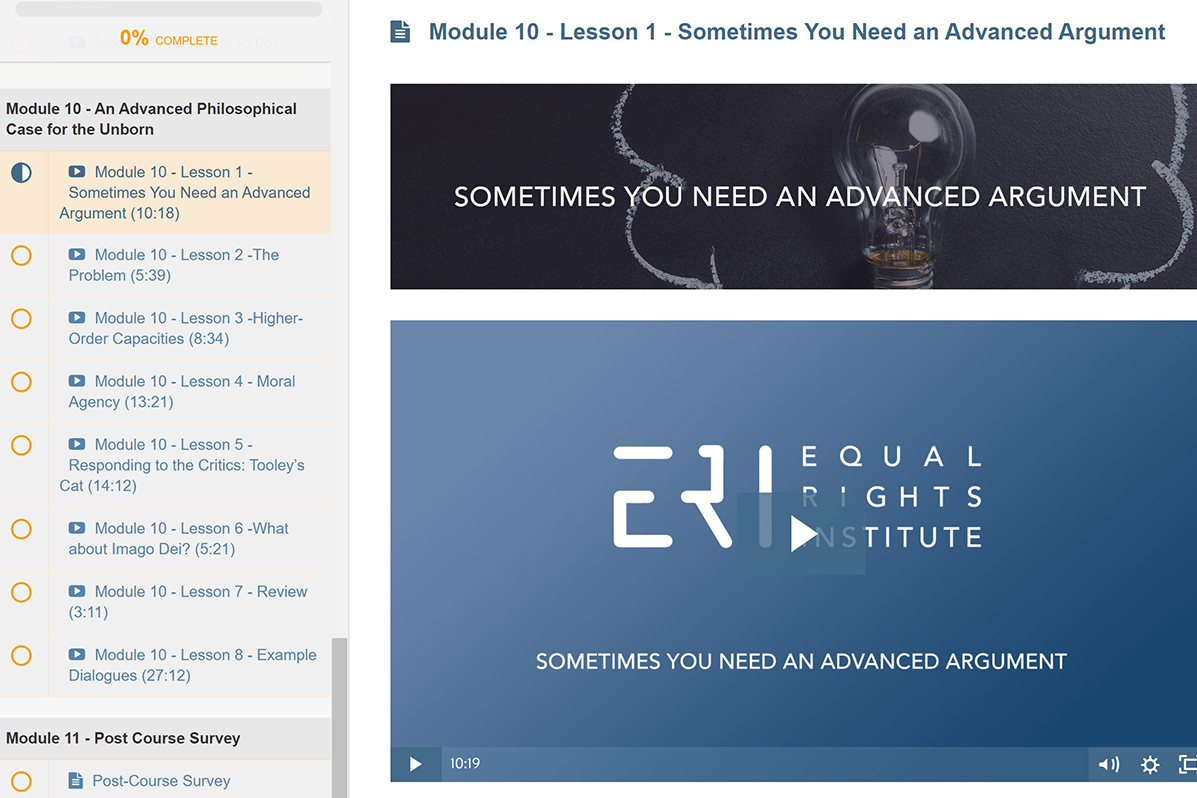 An Overview of the Lessons:

To join the Equipped for Life Course go to https://equippedcourse.com

This module builds on other lessons in the Equipped for Life course that train pro-life advocates how to make a case for the valuable life of human embryos. The original course teaches the first version of the Equal Rights Argument, which we have found to be incredibly persuasive in real conversations with everyday pro-choice people. This extension teaches a second version which is much stronger philosophically at the expense of simplicity. The second version is an adaptation of Russell DiSilvestro’s “Temporary Change Argument” which he makes in his excellent (but very advanced) book, Human Capacities and Moral Status.

While in academic circles Disilvestro’s approach to defending unborn personhood is very strong, it doesn’t translate well for one-on-one dialogues with people who are not scholars. In conversations with people who are not experts in philosophy, his arguments are typically unpersuasive because every day people would get distracted by how complicated and strange they are. While philosophers have somewhat agreed-upon rules about what is allowed in thought-experiments, lay pro-choice people are a lot more skeptical and they don’t accept those rules, so they often just reject thought-experiments that seem too weird. For this reason, we draw heavily on DiSilvestro’s definitions and distinctions but argue for them while still using the Equal Rights Argument’s original structure.

Our team also wanted to take a different approach than DiSilvestro does in his book to respond to the critics of his argument, namely Michael Tooley, David Boonin, and Jeff McMahan. This was one of the more significant challenges our team faced while creating the content and took the most time to develop.

We also wanted to tackle the question of what grounds personhood a little differently than DiSilvestro, who talks about a rights-granting set of capacities. Referring generally to a “set of capacities” works fine in academic writing, but general answers are not usually satisfying in conversations. Instead, we give a specific answer based on original work by our team. We believe our answer is the strongest solution as to what capacity grants serious moral status.

The new module is designed for people who already have a strong grasp of all other ERI arguments, including the original Equal Rights Argument and our materials on bodily autonomy. Due to the advanced nature of these videos, it is not advised to complete them until you are secure in our more basic material.

Yes, capacities are different from just talking about potential, but there are some similarities. We’re also talking about why human nature matters. We clarify this point in the videos.

Not often, unless you primarily talk to upper-class philosophy students or professors. The advanced version of the Equal Rights Argument shouldn’t be where you’re starting your conversations, and fewer than 10 percent of them will end up there.

We think it’s important to make the best, most airtight case for the personhood of the unborn that we can. This module gives our best answers to the most probing questions a pro-choice interlocutor can ask about the original Equal Rights Argument. We want you to be able to give those answers to the people who ask for them.

Comment | Share | Tweet | print | email
Category: ERI Updates
Disclosure of Material Connection: Some of the links in the post above are “affiliate links.” This means if you click on the link and purchase the item, I will receive an affiliate commission. Regardless, I only recommend products or services I use personally and believe will add value to my readers. I am disclosing this in accordance with the Federal Trade Commission’s 16 CFR, Part 255: “Guides Concerning the Use of Endorsements and Testimonials in Advertising.”