It was only two months after launching Equal Rights Institute last year before we facilitated our first outreach. We had our training seminar developed by then, but we hadn’t yet had the opportunity to design our own outreach tools. So we utilized our favorite poll table option that we learned during our work with one of our favorite pro-life organizations, Justice For All. The sign on the table asks “Should Abortion Remain Legal?” This sign always stops a good number of people who see it, giving us a chance to engage them in productive dialogue. 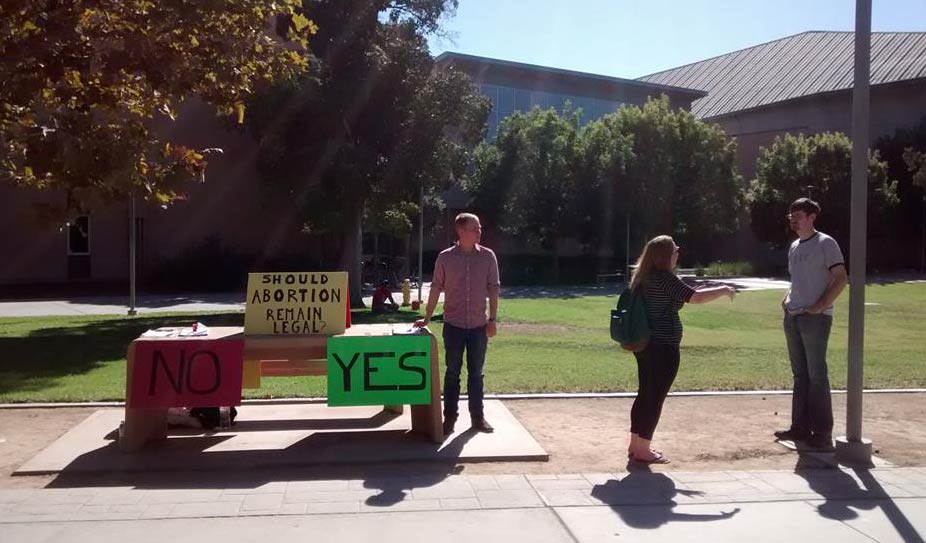 On September 26th, 2014, Equal Rights Institute trained a group of Biola University students. Then on September 30th we brought them to CSU Fullerton so they could put what they learned about dialogues about abortion into practice. We set up the “Should Abortion Remain Legal” poll table the way we have for years.

This spring my friend Dr. Charles Camosy reached out to me to ask me to preview his upcoming book, Beyond the Abortion Wars. It has now come out, and I would highly recommend reading it. We don’t always agree with his conclusions, but even the places where we disagree are well-researched, well-argued, and well-explained, and they help me to think more clearly about my own beliefs. Charles Camosy is a very unusual, very interesting voice in the pro-life movement and any pro-life advocate would benefit from wrestling with him.

While reading it I came across this section. These are excerpts from pages 26-29: (emphasis mine)

Our current abortion politics are part of a larger political structure and conversation. And at first glance, this structure looks hopelessly polarized. After all, it has been widely reported that Congress is now more polarized than at any time since the Civil War. But that description of Congress, much like our abortion politics, doesn’t reflect the complexity of what Americans actually believe. A recent Gallup poll, for instance, found the following breakdown in political affiliation in the United States:

This is hardly a polarized group of people: only 14 percent are in the “extremes.” . . .

This is also true of our abortion politics. At first glance, especially viewed through the lens of the media, we seem hopelessly polarized: as if this is somehow a fight between those who (1) want to ban abortion altogether in the name of stopping genocide and (2) those who want to make all abortions legal in the name of women’s equality. While some of the loudest voices in our public abortion debates hold these views, and while the media tend to tell their stories this way in order to generate ratings, Americans have views on abortion that are even more complex than their political views in general. This should not be shocking, of course, given the bizarre way that our abortion political categories and “sides” came to be formed.

The poll numbers tell a very different story of what Americans actually believe. According to a 2013 CNN poll, for instance, Americans thought abortion should be:

This reality, of course, does not fit into our lazy and imprecise “pro-life” “pro-choice” sound-bite rhetoric. . . .

Hence, in summing up the views of Americans on abortion, we can safely draw at least two conclusions:

1: A very clear majority of Americans want to see abortion more restricted than it is now, especially the “middle” weeks of pregnancy.

2: An overwhelming majority of Americans, including many who identify as “pro-life,” want to see abortion legally available in the exceptional 2 percent of pregnancies (rape or incest and a threat to the life of the mother).

We now have even more evidence that the categories we use to describe our abortion politics are woefully inadequate. Most Americans are “pro-choice” in some situations, and most are “pro-life” in some situations. In answering the question “Do you support abortion?” most Americans will respond, “It depends on the situation.” Indeed, we learned above that 70 percent of Americans say the term “pro-choice” describes them somewhat or very well, and nearly 65 percent simultaneously say the term “pro-life” describes them somewhat or very well. American abortion politics, at least in the general electorate, are complex and actually not polarized in the “us vs. them” way they are commonly portrayed. Though some find themselves on the extremes of the debate, most are in the complex middle.

As you can see, polling data clearly shows that Americans views about abortion are often complex and people don’t always agree with either ends of the spectrum in the debate about abortion. For most people, the accurate way for them to respond to the question of whether abortion should be legal is, “it depends.”

As soon as I read it, I thought of the “Should Abortion Remain Legal” poll table. The students who stop and talk to us or the staff at Justice For All can quickly tell that we understand that there is a spectrum of beliefs about abortion, that there are more than merely two positions people have on abortion. The problem is that the students who don’t stop and talk to us may perceive our views to be much less nuanced since we were only putting “Yes” and “No” options on the table. It looked like we were asking, “Which one of the only two possible beliefs about abortion do you have?” I suspect this was annoying for some passers-by who chose not to stop and talk to us for that reason.

After our staff discussed it, we decided the problem is not the question on the sign, but that we were only giving two options for people to sign. So we decided to add an “It Depends” option. 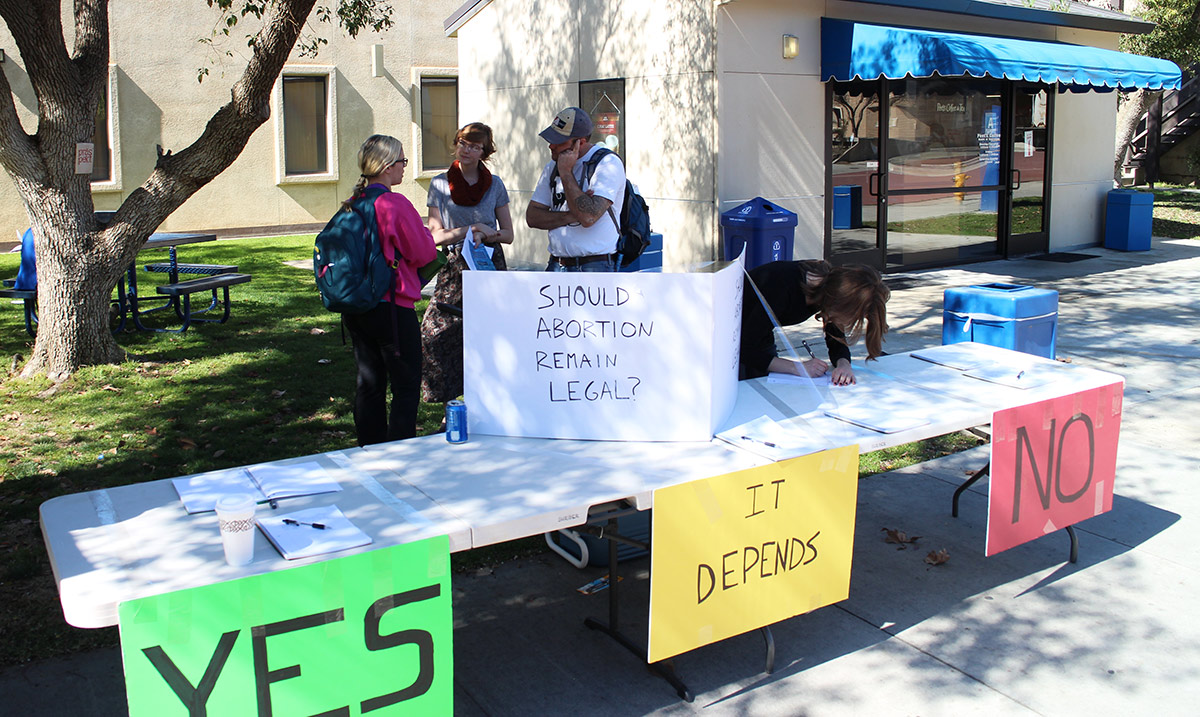 Our first opportunity to try the new poll table was at UC Bakersfield this spring.

We were pretty excited about the idea going into the outreach, and we were ecstatic about the results. 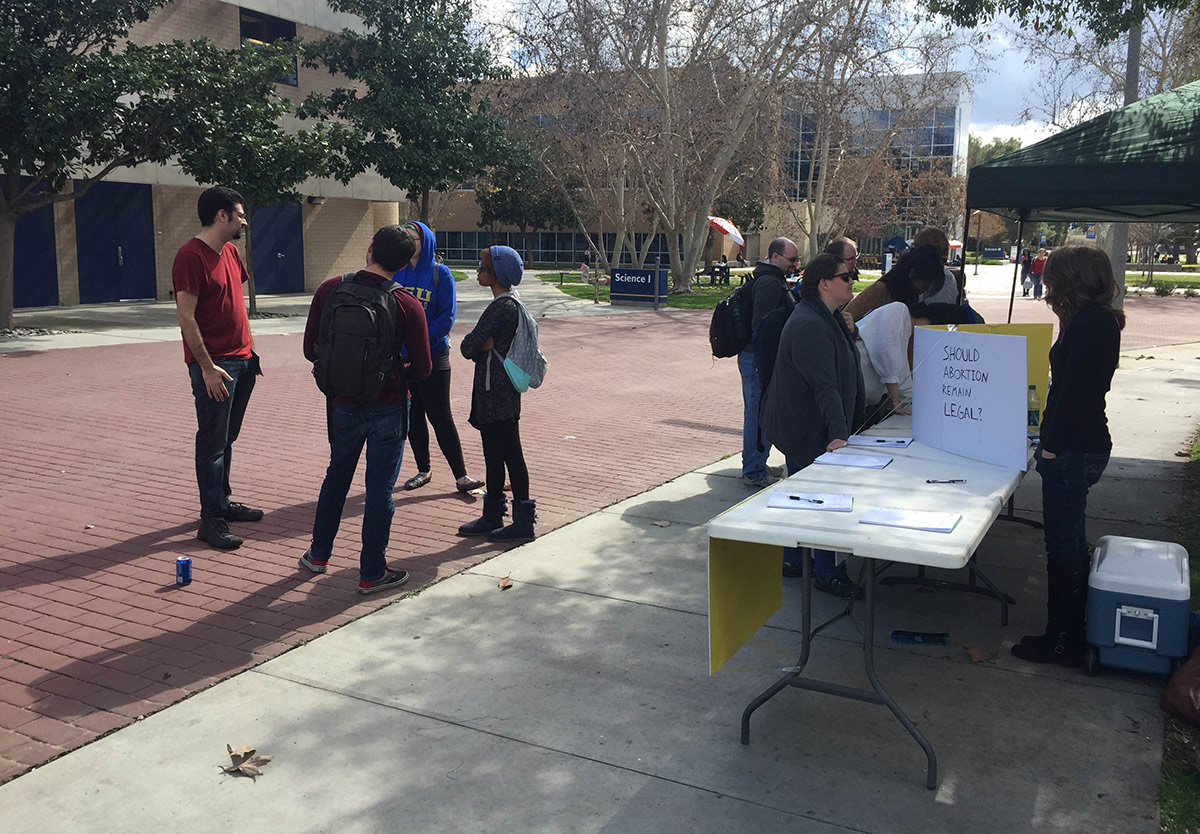 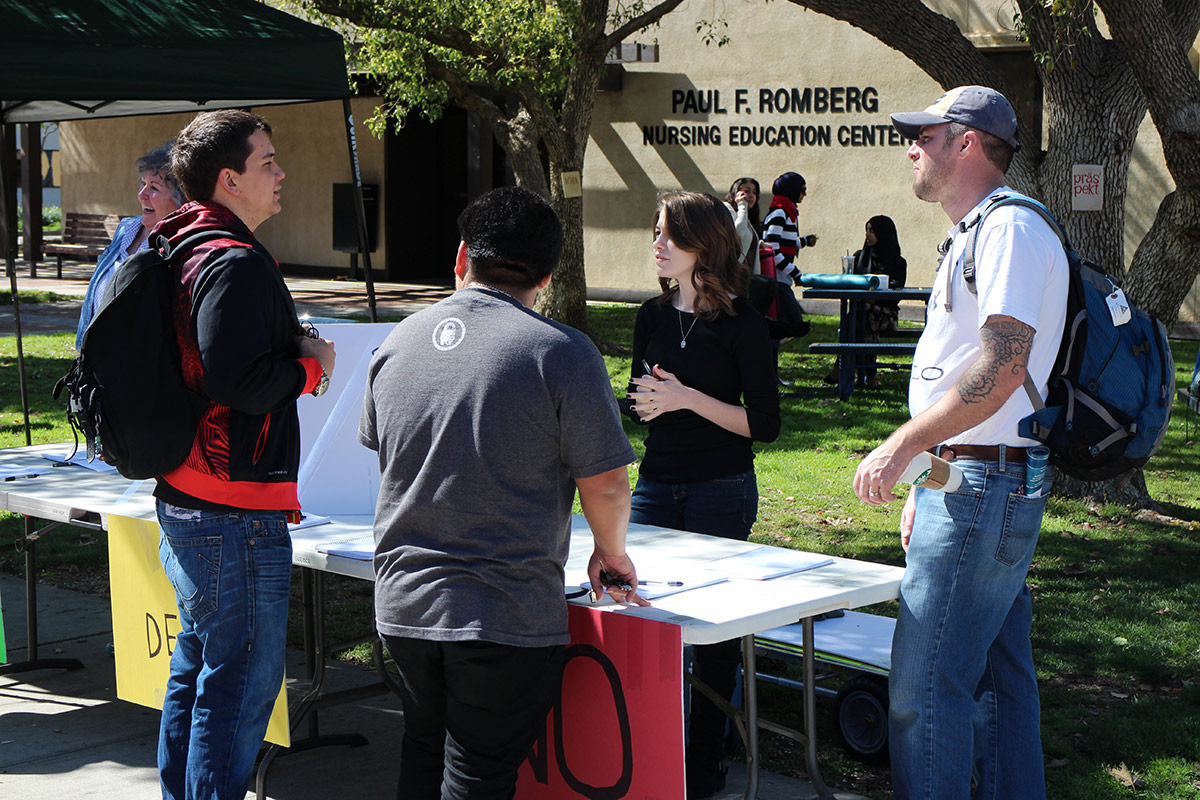 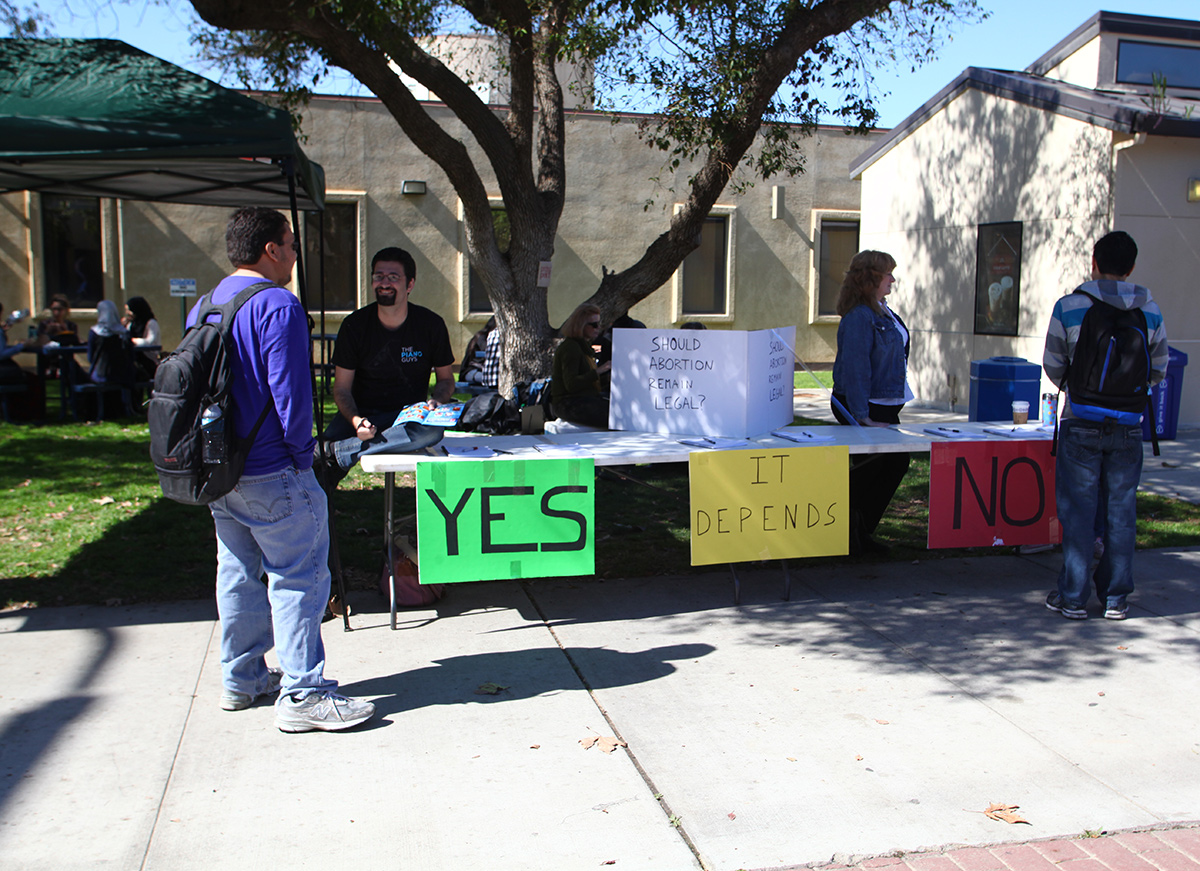 In order to make room for all three signs, we had to set up two folding tables, but we were surprised to find that that actually made the table function better to facilitate more conversations. At times we had five different conversations all taking place around the poll table, because there was enough space for it! 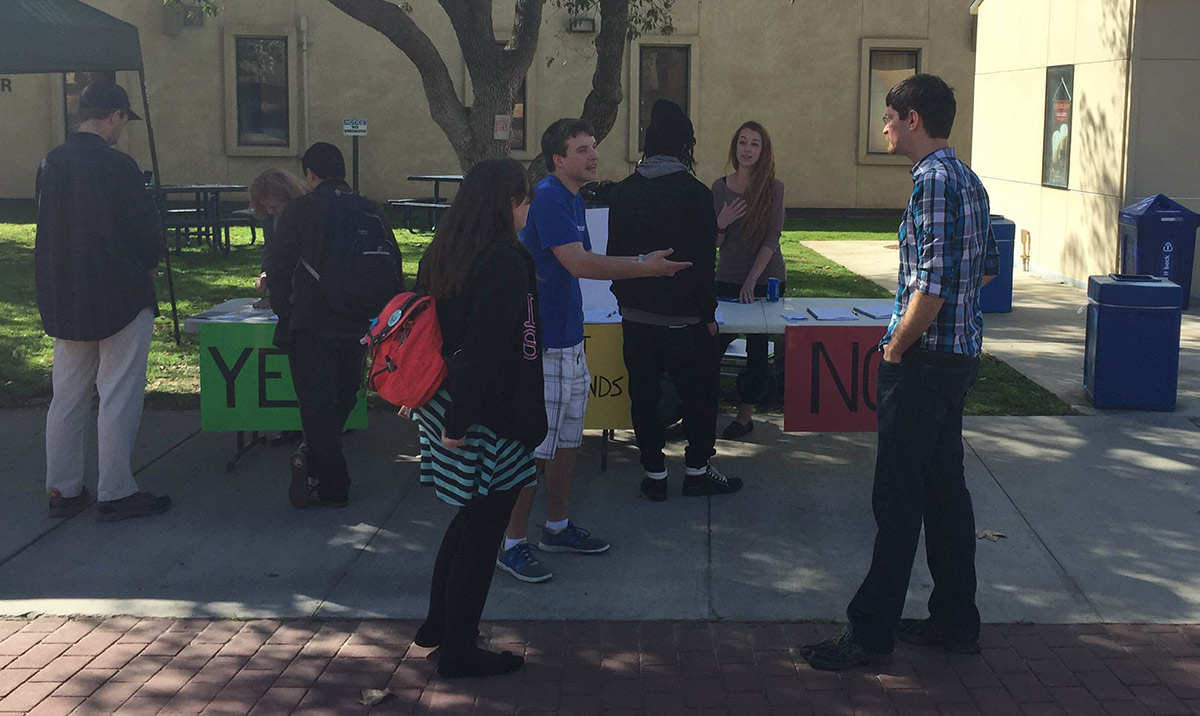 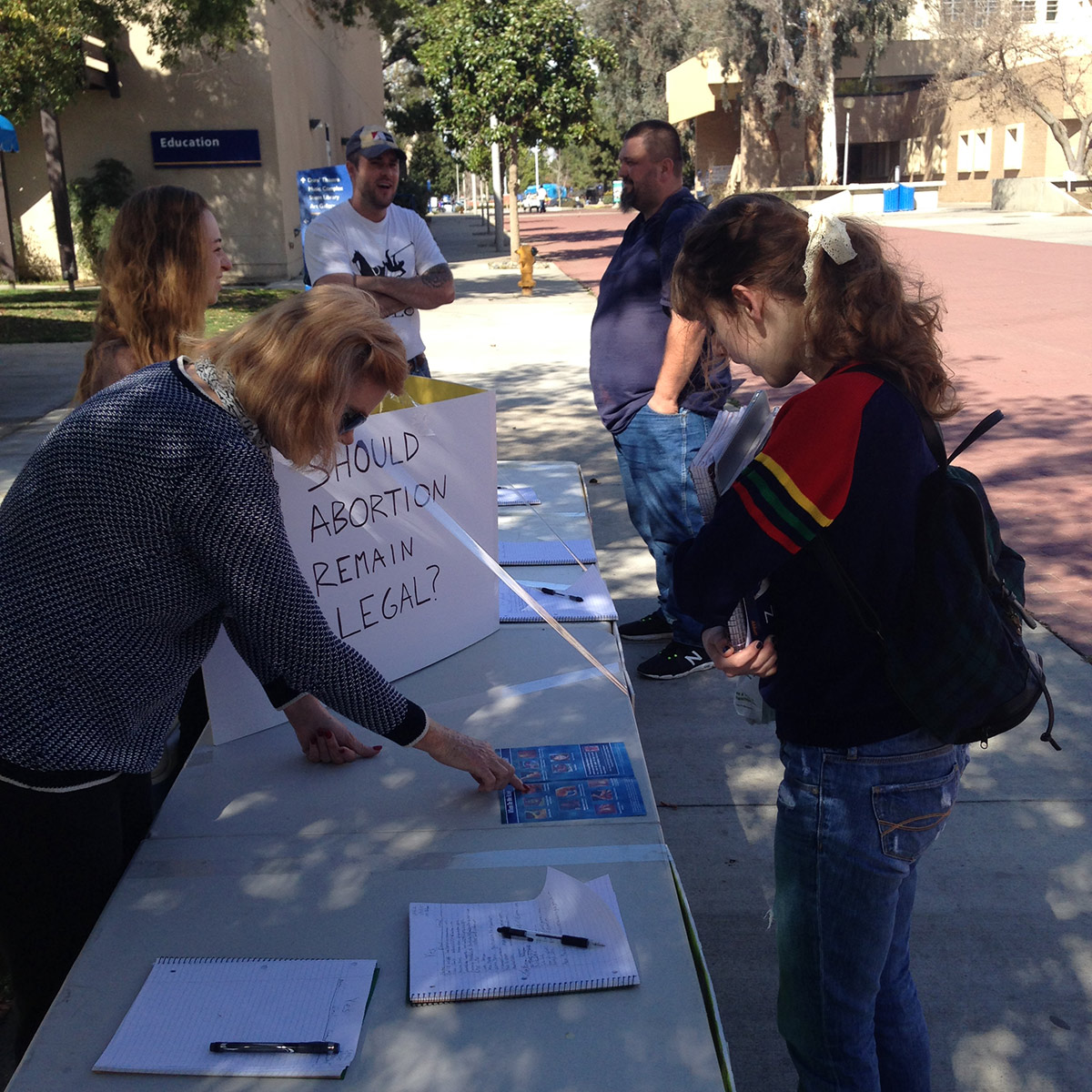 One concern we noticed was that our volunteers were more prone to standing behind the table, creating more of an “us vs them” visual. My preference is to get in front of the table, and when talking to a shorter person, to actually sit on the table, to show that I’m both relaxed and not trying to use my height as an advantage in the dialogue. (Yes, I’ve seen tall guys do that.) 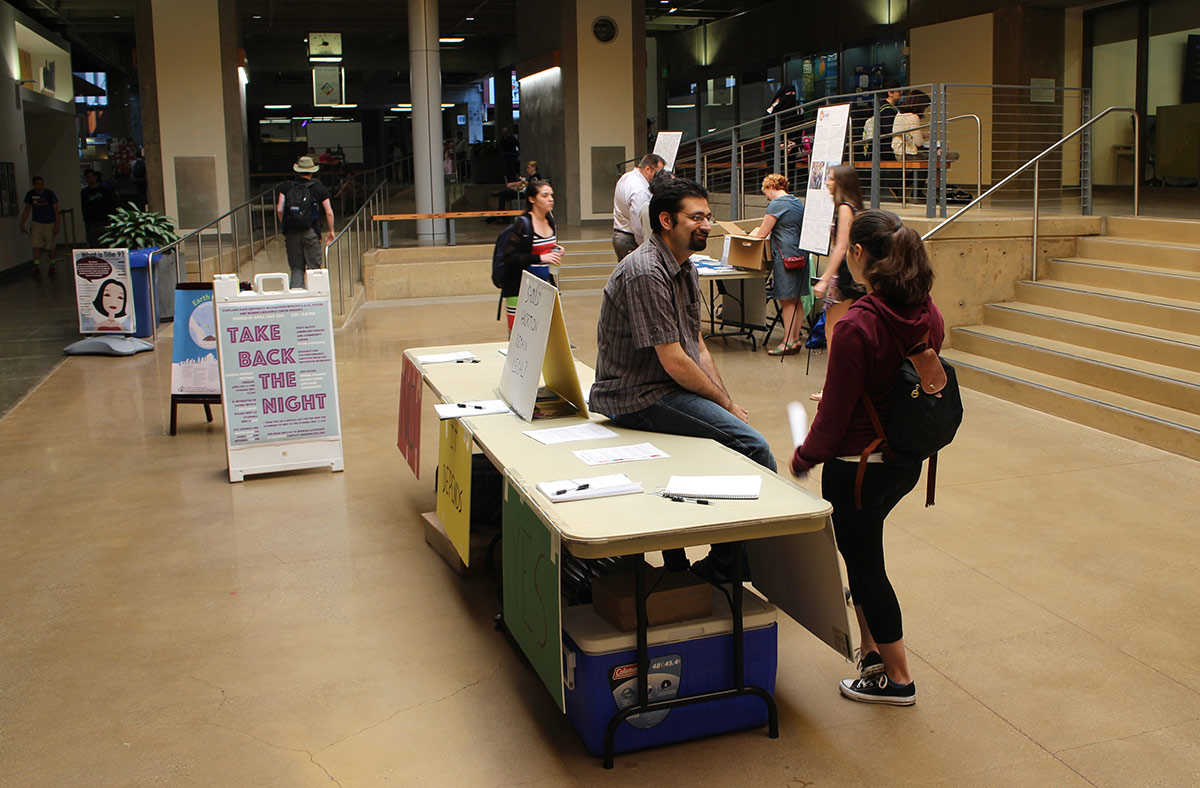 For example, this conversation (pictured above) I had later in the year at Portland Community College went really well. One of the two reasons “Ariel” told me she appreciated this conversation was my body language. (I’ll be talking about the second reason in a future article.)

One of the most interesting things about this table is that while students have told us they appreciate that we’re giving more options, few actually sign the “It Depends” option. We suspect some of them feel like they’d be betraying the side they more closely identify with by signing “It Depends.” Even if they don’t sign it, they are able to instantly tell something about us as soon as they see the table: we’re respecting them by offering them all the options, so they can define their views on abortion legality with the terms they’re comfortable with. We have only used the new poll table for about 30 hours of outreach, so we don’t have scientific proof that the new table is better. But it is the unanimous opinion of our staff that adding an “It Depends” option has been an improvement, and it’s very unlikely we’ll go back to the old version. This new poll table has given us more dialogue opportunities and those dialogues seem to start off on friendlier, more productive ground than they did before we added the third option. 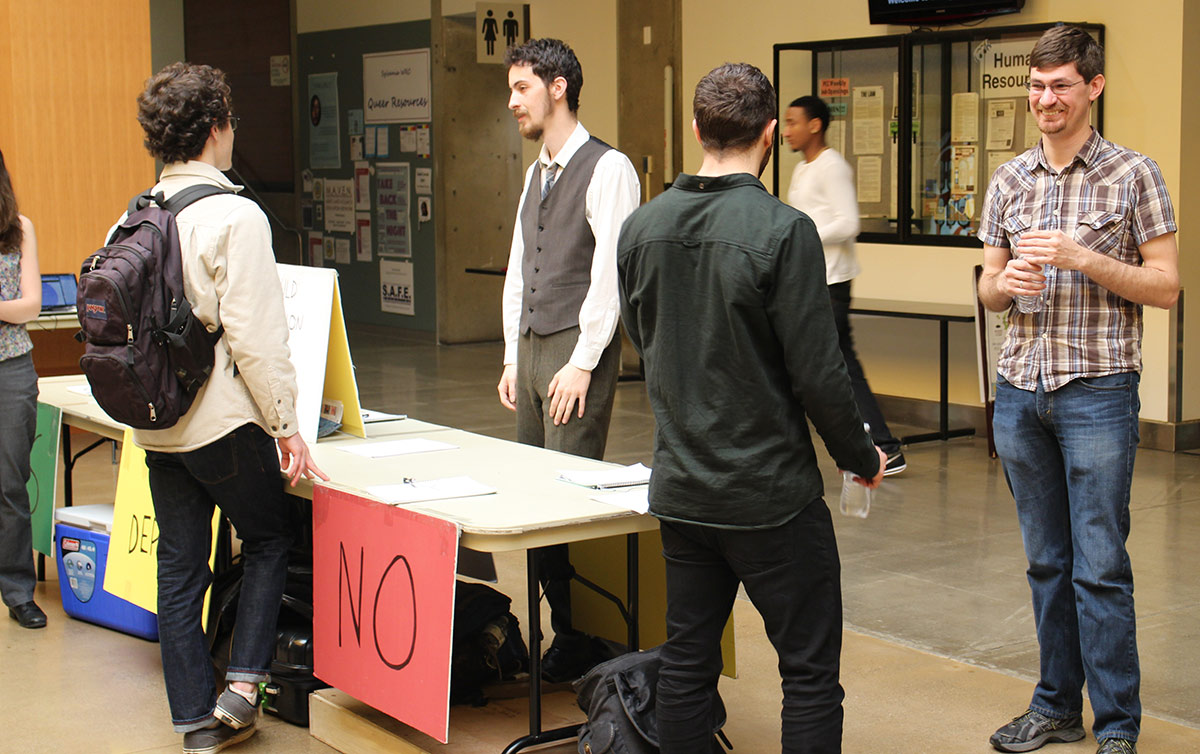 It’s so easy to unintentionally come across like you think there are only two views about abortion. [Tweet that!] The little things we do matter. When I talk to people about abortion, I don’t ask them if they identify with a label like “pro-choice.” I ask them to describe their own views about abortion. That tells me so much more about where they’re coming from, and as I listen to them and learn more about their own views and how they came to believe them, I not only slowly build rapport as a thoughtful listener, but I’ll also have a better opportunity to challenge the specific parts of their worldview most fundamental to their pro-choice position. This also prevents me from unintentionally implying that they are my nemesis.

The post “A Simple Change That Instantly Communicates Our Nuanced Approach to the Abortion Debate to Students” originally appeared at the Equal Rights Institute blog. Subscribe to our email list with the form below and get a FREE gift. Click here to learn more about our pro-life apologetics course, “Equipped for Life: A Fresh Approach to Conversations About Abortion.”

Comment6 | Share | Tweet | print | email
Category: Practical Dialogue Tips
Disclosure of Material Connection: Some of the links in the post above are “affiliate links.” This means if you click on the link and purchase the item, I will receive an affiliate commission. Regardless, I only recommend products or services I use personally and believe will add value to my readers. I am disclosing this in accordance with the Federal Trade Commission’s 16 CFR, Part 255: “Guides Concerning the Use of Endorsements and Testimonials in Advertising.”